SINGAPORE - Three companies being investigated by the National Environment Agency (NEA) over the 2015 haze crisis had large numbers of fire alerts on their pulpwood concessions this year, an analysis of fire alerts published on Monday (Nov 18) shows.

The three companies supply wood to Singapore-based Asia Pulp & Paper and are among eight pulpwood concessions with the highest number of fire alerts in Indonesia based on data from Nasa's VIIRS, a satellite-based imagery tool that detects hot spots.

Another company, PT Sumatera Riang Lestari, a supplier to Singapore-based Asia Pacific Resources International Holdings Limited (April), is also on the list with the second-highest number of alerts. Its concession area is in Riau province.

Koalisi Anti Mafia Hutan, a coalition of non-governmental groups focused on forest and land management in Indonesia, used the satellite data to check the number of fire alerts between Jan 1 and Oct 31 this year on industrial pulpwood concessions. These concessions supply wood to make paper products and rayon to make clothes. A large number of fire alerts were detected in plantations on peatlands.

Apart from the four firms listed above, four others in the list included three other APP suppliers and another affiliated with Marubeni Corp of Japan.

Indonesia has millions of hectares of peatlands which, if left untouched, are normally forested swamps. The water locks in the dense, carbon-rich peat base. But years of development in the country have cleared and drained large areas of peatland.

Dried out peat is highly flammable and when burned produces a thick, toxic smoke that can cause severe respiratory illness. It also produces large amounts of carbon dioxide.

In 2015, the NEA launched an investigation into these three APP suppliers and one other, PT Sebangun Bumi Andalas Woods Industries, under the Republic's Transboundary Haze Pollution Act (THPA). The Act targets those responsible for causing or condoning fires if burning results in unhealthy levels of haze in Singapore - defined as a 24-hour Pollutant Standards Index value of 101 or greater for 24 hours or more.

Asia Pulp & Paper, once linked to haze, set to return to shelves after getting green certification

"As part of its investigations, NEA had also written to Asia Pulp & Paper Company Limited pursuant to Section 10 of the THPA 2014 to request for information on the four suppliers, and it has provided NEA some information in response to the Section 10 Notices. NEA has no further questions for Asia Pulp & Paper Company Limited at this time," the spokesman said.

Large areas of industrial wood concessions in Indonesia are on cleared peatlands, which have huge drainage canals. APP and April have plantations on peatlands in Sumatra and Kalimantan totalling about 750,000ha, about 10 times the size of Singapore. The companies stress they carefully manage water levels on their concessions to cut fire risk.

Not all fires in Indonesia are caused by companies. Many are lit by smallholder farmers to clear the land to plant crops. Others are lit illegally inside company concessions during land disputes or by illegal loggers.

Many larger pulpwood and palm oil companies also have dedicated firefighting crews and can face hefty penalties for fires within their concessions.

However, NGOs point out that despite company efforts to minimise the fire risks, planting across vast areas of peatlands makes the landscape more prone to fires, especially during very dry seasons when water table levels fall.

They also point out that expansion to boost wood pulp production for paper or dissolving pulp for rayon adds further pressure on fragile peatlands and locks in the use of peatlands for decades to come.

April says the new factory does not increase the capacity of the pulp mill complex in Riau but NGOs point out that the viscose plant will rely on a specific type of Acacia that grows best on peatlands.

APP says fluctuations in wood supply demand for the new mill will be met by importing certified wood chips from suppliers, not through deforestation or the development of new peatland plantations.

WHAT THE COMPANIES SAY

In response to the report by Koalisi Anti Mafia Hutan, Asia Pulp & Paper and April cast doubt on the methodology used by the coalition to analyse fire alerts and said from their experience many fire alerts proved to be false.

"Multiple hot spots in one location can also raise the number of hot spots. Using gross numbers to reach a conclusion is at best an approximation but is certainly not good science," said Mr Bernard Tan, Country President Singapore, Sinar Mas, the parent company of Asia Pulp & Paper.

He said that as at the end of September, the last date when official figures have been published, APP has had less than 1 per cent of its concession areas affected by fire and had no land areas sealed by the authorities.

"Singling out industrial plantation companies as being responsible for fires, is a selective reading of the situation and ignores the very real complexities of fires in Indonesia," Mr Tan said in a reply to The Straits Times.

April said that apart from a small number of fire incidents that it had publicly reported, "we do not have evidence otherwise of systemic fire damage inside April's concession areas". 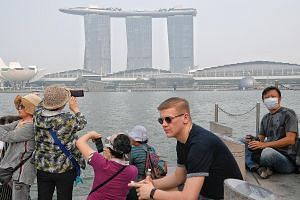 Clearing the air over fire and haze: It's complicated, say experts of fire situation in Indonesia

"Based on years of hot spot monitoring and ground verification, we know that there is a poor correlation between hot spots and fires. In April's concessions, 92 per cent of hot spots are not fires, and some fires do not register as hot spots at all."

The company said the fires in PT Sumatera Riang Lestari were the result of an ongoing land dispute with local communities trying to expand  oil palm plantations.

Mr Syahrul Fitra, communications director for Indonesian NGO Auriga, one of the coalition members that wrote the report, said. "We acknowledge in the report that a small number of hot spots could be false positives (Nasa estimates around 7 per cent)."

"APP's own fire data between Oct 8 and Nov 5 published on their website indicates 79 per cent of hot spots were confirmed as fires, 10 per cent were verified as not fires, and 11 per cent had yet to be verified. This suggests a significantly higher rate of actual fires to hot spots than either company acknowledges in their responses to the report, and it aligns pretty closely to the false-positive rate that Nasa indicates for the dataset," he added.

Mr Syahrul also said April's claim that there is a poor correlation between hot spots and fires was not supported by science.

"In the case of Sumatera Riang Lestari, 97 per cent of the 2,075 hot spots were medium to high confidence, which have an even lower rate of false positives."

"Also, we expect that many fires on peatlands are not detected by the hot spot sensors. Peatland fires are often smouldering and may not even produce visible flames as they burn below the earth's surface," Mr Syahrul added.

He also disputed April's account of fires occurring in only one block of PT Sumatera Riang Lestari's concession area this year, and that that block is non-operational because of community conflict.

"Our report documents that four of Sumatera Riang Lestari's concession areas had serious fires," he said. "April is continuing a pattern that we have seen again and again from them, of shifting blame to communities for problems to which the company has clearly contributed."