"There are already 42 containers with waste content here for a very long time and need to be returned to the UK.

"Now, another three containers are stranded at the NBCT despite us trying to get rid of them.

"The three containers did not contain recyclable waste, but consumer waste," he said during a press conference after launching the Regional Logistics Conference 2019 at Komtar last Thursday (Sept 26).

Mr Phee said three officers from the Department of Environment were at the terminal to check on the containers.

He said the officers were pleased after being briefed on the procedures taken at the terminal to vet containers that were brought in through the port.

"Despite speaking with officials at the Urban Wellbeing, Housing and Local Government Ministry, approval was given and the waste was brought in.

"We have now suggested that they need to control it at source in the UK itself. 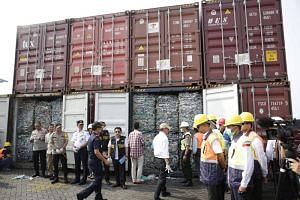 Indonesia returning hundreds of containers of waste to West

Malaysia wants to return tonnes of plastic waste - but to where?

Tensions over thousands of tonnes of trash

"When sending anything to a different country, it must be inspected when the container is loaded.

"Authorities at the port of origin must fully declare what they are placing in the container.

"All the declarations must be clearly stated in the cargo manifest, then the local customs here will inspect it and if the information provided is wrong, we will fine them," he said.

Mr Phee said the state had proposed to send the three containers back.

"We have said we cannot accept their dirty goods. We want them out of our country," he said.

Mr Phee said the representatives were currently inspecting the documentation of the earlier 42 containers from Britain.

"They arrived over this year," he said.

The containers were shipped in from various places such as Britain, the United States, Canada, Belgium, Germany, Hong Kong and Japan.