KUALA LUMPUR - Three multimillion-dollar properties worth a total of US$109 million (S$150 million) in the United States linked to fugitive Malaysian financer Jho Low are to be put on sale, Malaysiakini news site reported on Thursday (May 30).

The US Department of Justice (DOJ) had previously alleged the properties were bought with funds from scandal-tainted Malaysia state agency 1MDB during the Najib Razak administration.

The DOJ had said US$4.5 billion of 1Malaysia Development Berhad funds were misappropriated by top Malaysian government officials and their associates, and had moved to seize some of the assets in the United States.

The move to sell the three properties followed agreement by parties involved a civil forfeiture on the assets, to ask a US court to allow their provisional sale.

These are a US$39 million mansion, and a US$31 million New York penthouse in the Time Warner complex, Malaysiakini reported.

Separately, the same US court also granted an earlier application for an interlocutory sale of a US$39 million mansion in Los Angeles that is also linked to Low, whose whereabouts is unknown.

A Reuters report earlier this month said the empty Los Angeles mansion above the trendy Sunset Strip is falling into further disrepair by the day and costing US$690,000 a year in taxes, insurance and maintenance, lawyers for the Justice Department and for Low's holding company had said in a request to sell the property. 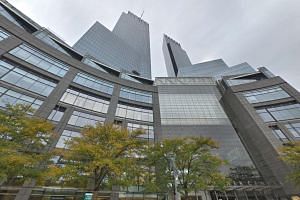 A sale was needed as "the expense of keeping the property is excessive and/or is disproportionate to its fair market value", they had said in the filing in California.

The three properties were part of assets totalling US$1.7 billion allegedly bought using stolen 1MDB funds that the DOJ wanted to seize in 2016 and 2017.

The news report on Thursday said the sale does not mean Low, who is challenging the forfeiture, is giving up his claim on the property.

In November, Low dropped his claim to stakes in the New York's Park Lane Hotel to facilitate its sale to Abu Dhabi state fund Mubadala, as part of a US forfeiture lawsuit.

The US is expected to repatriate US$139 million from the sale back to Malaysia.

Meanwhile, jewellery said to be given to Low's mother Evelyn Goh worth nearly US$1.7 million is now in the custody of the US government, Malaysiakini said.

The diamond earrings and matching ring were received by the US Marshals Service two weeks earlier, following a warrant of seizure issued in June 2017.

Low was invoiced for the jewellery in November 2012, the report said.

Goh reportedly picked up the jewellery in Hong Kong.