Student activist Adam Adli and Suaram coordinator Syukri Razab were detained at the entrance of the Dang Wangi police headquarters at around 4pm on Friday.

They were at the station to meet Dang Wangi police over their plans to stage a protest outside Sogo shopping centre to call for Prime Minister Najib Razak's resignation. 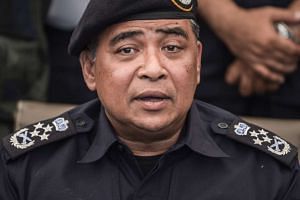 The three individuals will be investigated under Section 124 of the Penal Code.

DCP Law warned the public not to participate in a planned illegal rally organised by Demi Malaysia and a few other non-governmental organisations in Kuala Lumpur on Saturday.

"We must keep the peace in city and hold the rule of law. Action will be taken accordingly against those who break the law. We are colour-blind.

"We are not threatening anyone. We are just enforcing the law of the land," he said.

DCP Law also reminded the public to not spread rumours that could jeopardise public order and said those found guilty of the offence can be arrested under Section 505 of the Penal Code.

In a separate development, DCP Law urged people not to speculate on whether police had raided Attorney-General Tan Sri Abdul Gani Patail's house on Saturday morning.

"Don't speculate. It's not good and healthy for the society.

"If it is true, we will inform you. You wouldn't have to ask," he told reporters at the Dang Wangi police headquarters on Saturday.