In his article, the writer says the Asean Smart Cities Framework sets the guideline, but making it happen will take time.

JAKARTA (THE JAKARTA POST/ASIA NEWS NETWORK) - Currently one third of Asean's population live in medium-sized cities (home to between 200,000 and 2 million people) but they contribute about two thirds of its gross domestic product. By 2025, it is predicted that the population living in medium-sized cities will double, making them the main engine for the region's economic growth.

As a result, rapid urbanisation and its impact will create multidimensional challenges that will need immediate economic, social, environmental and institutional solutions.

If not managed properly, issues such as congestion, waste disposal, pollution, security and safety, financial and physical infrastructures, including affordable housing, will make the cities a poor place to live in and subsequently lower their people's quality of life.

Climate change is another major issue confronting cities around the world, including Southeast Asia.

About 70 per cent of them are already dealing with the impact of climate change, and nearly all are in jeopardy. Over 90 per cent of all urban areas are coastal, putting most cities on earth at risk of flooding from rising sea levels and powerful storms.

Larger cities have a ravenous appetite for energy, consuming two thirds of the world's energy and creating over 70 per cent of global CO2 emissions. Therefore, emission reduction in the cities will play a significant role in dealing with global warming.

Relying on the proliferation of digital information technology and responding to the above threats to future cities in Southeast Asia, initiated and developed by Singapore, Asean has established the so-called Asean Smart City Framework (ASCF) implemented through the Asean Smart City Network (ASCN). 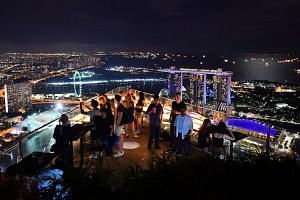 Asean smart cities - do not forget the disabled

The ASCF is the foundational document for the ASCN and serves as a nonbinding guide for smart city development in Asean.

The basic idea behind the ASCF is that, the enablers, in this case digital technology and its application, funding and partnership, will ignite the focus of city development in the form of civic and social, health and wellbeing, safety and security, quality environment, built infrastructure, industry and innovation to achieve a sustainable environment, competitive economy and high quality of life through integrated, adaptive and dynamic urban governance.

This is one of the most comprehensive concepts and definition of smart cities in literature.

It covers not only the economy, social, environmental and institutional components, but also discusses the source of forces to stimulate a smart city development.

The most important aspect is that it is going to be done through integrated, adaptive and dynamic ways, involving the private sector to boost developments in, currently, 26 cities across Asean.

However, this beautiful concept is going to face some ethical and factual challenges when it comes to implementation.

The following are some critical thinking on how to respond to the emergence of smart cities in Asean.

First, experiences in city developments around the world shows that during the process of development there will be winners and losers.

From an ethical point of view, while there are many good things that can be achieved, the dependence of a smart city on data, information and digital technology in collaboration with the private sector will potentially increase the risk of instantiation of corporate power grabs, embedding surveillance and private control over urban management.

Collaboration between the digital corporate power and despotic municipal governments could threaten the very basic human right issues in some Asean cities as some citizens have already experienced intimidation over the internet when they criticise injudicious government behaviours.

At the same time, this can be seen as a repackaging of neoliberalism in the bandage of mesmeric digital technologies and reenvisioned municipalities and citizens according to a Bosch report of 2017.

The question to ask is: What is the role of communal management of certain spaces in the city? This question is asked on behalf of those who do not have access to land and property, and are usually the poorest of the poor in the city.

Second, Asean is not only a very diverse region in terms of economic development, governance, political systems and cultural backgrounds, but also capacity and resources to deal with enormous challenges in city development. Due to this diversity, no uniform approach will be effective in moving toward a smart city.

Third, horizontal and vertical coordination among institutions in some Asean cities are still problematic.

While the Mandalay committee is equipped with sophisticated technology to monitor public compliance to rules and regulations, coordination with those agencies enforcing the law was so weak leaving those breaking the law untouchable.

Fourth, while Asean has already had an ample framework for an smart city, the absence of thorough standards to prepare and assess a smart city status could decelerate the adoption process.

While Singapore has been able to provoke other cities in Asean to move to the smart city path, most of them will need to adjust their speed and put more effort in using digital technology to deal with the basic city issues they are facing.

While doing so, the principle of data protection as currently being developed by the United Nations will need to be considered. Participatory, inclusion and good governance should also be integral parts of the smart city development processes in Asean.

At the same time, it is critical for policymakers in Asean to develop a clear and transparent public-private partnership mechanism in data and information management as well as to bridge the digital division among different groups in the city.

The writer is an international consultant focusing on climate change, biodiversity and nature resource management governance. The Jakarta Post is a member of The Straits Times media partner Asia News Network, an alliance of 23 news media organisations.