HO CHI MINH CITY, VIETNAM - A raid on an establishment in the southern Vietnamese province of Dong Nai has uncovered nearly half a tonne of beef internal organs that were being treated with chemicals to be sold as food.

The raid in Dong Nai, which neighbours Ho Chi Minh City, found around 20kg of beef visceral organs being soaked in bleaching chemicals at the organ processing facility, police said on Tuesday (May 15).

After bleaching, the organs were intended for sale in the market as fresh products.

Officers involved in the raid in the provincial capital of Bien Hoa also caught six employees in the act of processing 400kg of beef internal organs - including intestines, livers and stomachs - on a dirty floor of the facility, Tuoi Tre News reported.

The facility's owner, Trinh Quang Thai, could not provide documentation on the organs' origin or his business licence. He was subsequently slapped with a financial penalty and all of the organs were seized for examination.

Thai said the organs had been bought from slaughterhouses in Dong Nai and were expected to be sold locally after being chemically processed.

He added that around 300kg of internal organs were processed every day at the facility. 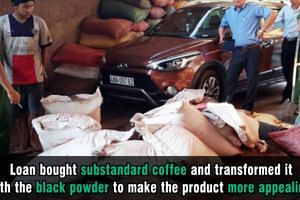 Beef organs are often made into phalau, a stew of organs that is a favourite street food in Vietnam.

A slew of food safety scandals in Vietnam over the years has dented many residents' trust in the vegetables and meat they consume.

In 2016, a financial penalty was imposed against two facilities for immersing sprouts in chemical solutions that stimulated their growth and made them whiter than usual.