BANGKOK - No longer content to just whisper in private settings their views on the monarchy, Thais are now openly discussing, and at times criticising, the royal family despite harsh laws.

With the authorities closely monitoring Facebook, more people in Thailand - where over 4.1 million Twitter accounts are registered - are venting via tweets, while hiding behind fake names and photos, often of K-pop stars.

The country rang in the new year with #IslandsShutdown, the top trending hashtag on Twitter for a few days.

This was after the authorities closed off parts of the popular southern islands for a year-end visit by Princess Sirivannavari, King Maha Vajiralongkorn's youngest daughter.

Government letters, seen by The Straits Times, were issued to tour operators in parts of Nopparat Thara National Park and Phi Phi islands ahead of the four-day trip on Dec 29.

Operators were asked to cooperate and shut down their diving and snorkelling trips, and other tourist activities for the day.

Fishing boats and other vessels in the waters had to vacate parts of Phang Nga Bay National Park on Dec 31 and near Phuket on Jan 1.

The #IslandsShutdown hashtag was used about 382,000 times as of Jan 1 but has since been repeated more than a million times.

The criticism of the 33-year-old princess and the authorities is not a one-off but an unprecedented "macro-level structural change of Thai society which has already been set in motion", said Dr Soraj Hongladarom, a philosophy professor at Chulalongkorn University.

He was referring to the change in attitudes towards the monarchy.

The viral hashtag comes three months after #RoyalMotorcade became the top trending hashtag on Twitter in October with over 250,000 retweets.

Thais used the hashtag to voice their frustration over road closures that were imposed by the authorities to facilitate what is believed to be a royal motorcade.

It was the first time a group of people used Twitter to criticise the handling of the royal motorcadevia a trending hashtag.

In March last year, the hashtag #OldEnoughtoChooseforMyself went viral soon after the King released a statement on the eve of the general election urging people to vote for "good people".

Former junta leader Prayut Chan-o-cha became prime minister for the second term thanks to the nomination of Palang Pracharath – the party which won the second biggest number of seats, allowing it to form a government coalition – and the votes from the rubber-stamped Senate. 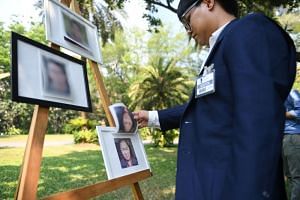 Thai exiles in fear after murders and disappearances

Deaths, jail and cyber spies: The dangers of dissent in Thailand

The growing boldness is a surprising development, Dr Soraj said. There are enough examples of people being thrown into jail for violating the kingdom's lese majeste laws or breaking computer crime laws with their monarchy-related social media posts.

In one notable case, prominent anti-junta student activist Jatupat "Pai" Boonpattararaksa was jailed after sharing on his Facebook page a controversial BBC biography of the new king. The student was arrested a few days after the 67-year-old king ascended the throne in December 2016.

Although more than 2,000 people had shared on Facebook the same article, he was the only one arrested. Mr Jatupat spent two and a half years in prison before being released in May last year in a mass royal pardon.

The longest sentence to date for breaking lese majeste laws is 35 years.

It was handed down on a Thai man in 2017 for 10 Facebook posts he had made. He was originally sentenced to 70 years behind bars, 10 years for each post, but it was halved after he pleaded guilty.

Most recently in October last year, a 25-year-old man was charged with computer crime over national security issues, which has a maximum penalty of 5 years' jail, for outlining different ways monarchy ended in other countries.

When asked why monarchy-related online comments are categorised as national security issues, Dr Paul Chambers, a political scientist at Naresuan University, said: "The kingdom's security is synonymous with national security, hence the monarchy must be guarded at all cost."

According to human rights lawyer Anon Nampa, who also posted criticism of the island shutdown on Facebook, the real issues in the incidents in October and December lie with the lack of clear communication on road closures and when other facilities have to call a halt to its operations, as well as the authorities' attitude towards pedestrians.

Often, as the royal motorcade races by, pedestrians would sometimes be told to leave overhead bridges and sit by the roadside.

"It's all about the middle ground and treating people with respect. There should be some adjustments. If not, the tension may escalate," he said.