Mr Viroj, a police lieutenant-general, was the only name on the leadership ballot, the party said in a briefing on Sunday (Oct 28). The party added it will decide later if Mr Viroj - who was once a deputy prime minister in an earlier Thai administration - will be its candidate for prime minister in the national poll.

A military government has been in power in Thailand since a coup in 2014 that ousted a Pheu Thai-led administration. Mr Prayut Chan-o-cha, the former army chief who seized power, has flagged Feb 24 through to May as the window for holding the delayed general election.

The current stretch of military rule is one of the longest since the 1970s, in a country with a history of army intervention.

Pheu Thai and other parties linked to fugitive former premier Thaksin Shinawatra have won the past five elections, only to be unseated by the courts or the military. The discord reflects deep fissures in Thai society between urban royalists, known as the so-called yellow shirts, and Thaksin and his rural support base, the red shirts.

Pheu Thai core member Sudarat Keyuraphan, 57, was also voted in as a chairperson for the party’s executive committee and another committee that will oversee the selection of party candidates for the election.

“What I have to do now is to gather all the capable people in the party and bring out their best to work for the people,”Sudarat told reporters at the assembly.  “We will now go and talk to the people and consult them to formulate our party’s policies,” Sudarat said. 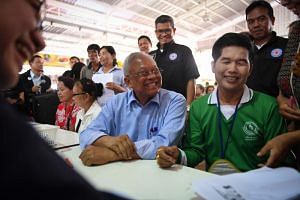 Newly elected party executives said it was too soon for the party to nominate its candidate to contest for prime minister and instead will focus on working out the party’s policies first.

“In the past there has been efforts to destroy our party in various ways but because of the support from the people we believe the party can overcome,” Phumtham, the party’s secretary-general, told the media at the party’s general assembly.

“Now we are ready to move towards the election,” he said.