BANGKOK - Thailand plans to appeal the upcoming suspension by the United States of trade benefits it had granted the country, a senior government official said on Monday (Oct 28).

It was announced last Friday that President Donald Trump will suspend US$1.3 billion (S$1.7 billion) in trade preferences for Thailand due to its failure to address worker rights.

The suspension starts on April 25 next year.

The suspension would affect 573 Thai product types exported to the US, such as seafood, agricultural produce, soy sauce, seeds, syrup, sugar, kitchen appliances, plywood, jewellery, gold, iron and stainless steel, according to the Foreign Trade Department.

This accounts for approximately 70 per cent of Thailand's exports to the US that are exempt from 4.5 per cent tariffs. Re-imposing the levies will add 1.5 to 1.8 billion baht (S$ 67.8 to 81.4 million) to the prices of goods for US importers, said Mr Keerati.

Thai officials plan to discuss the issue with their US counterparts at a sideline event on the last day of the Asean summit that will be held in Bangkok from Oct 31 to Nov 4.

"We will do everything we can to solve this problem, including diversifying our markets to the Middle East, Eastern Europe and Africa. We will use all the channels we have to get new markets," said Mr Keerati.

The US is Thailand's second largest trading partner after China, while Thailand is the US's 20th. The US goods trade deficit with Thailand was at US$193 billion in 2018, according to official figures. 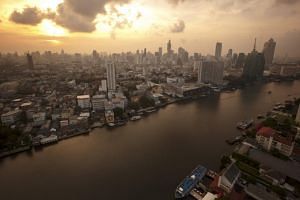 Thailand has been enjoying the tariff benefits given to developing and underdeveloped countries since 1976, according to the Foreign Trade Department.

"The move to reconsider the benefits was set in motion in 2015 when the AFL CIO filed a complaint. To say that the decision was a surprise is not true. The department has been aware of it for some time and it has been working to prepare Thai exporters for the change," Mr Keerati said, referring to the largest US labour union federation.

In 2014, southern Thailand was turned into a Rohingya trafficking highway, prompting the US to downgrade the country's efforts in anti-human trafficking.

Media exposes in 2015 on rampant rights abuses of foreign workers on Thai fishing boats and illegal fishing also prompted the European Union to issue a yellow-card warning to Thailand's multi-billion-dollar fishery industry, a step before banning its seafood exports.

The warning was lifted in January this year following a number of steps the Thai government took in tackling rogue fishing operations.