BANGKOK (REUTERS) - Thailand suspended efforts on Thursday (July 12) to salvage a boat that capsized and sank off its resort island of Phuket, officials said, putting the death toll in its worst tourist-related disaster in years at 46.

The Phoenix had 101 on board, including 89 tourists, all but two of them from China, when it went down in rough seas last Thursday during an outing to a small island. Forty-two passengers and the crew of a dozen Thais were rescued.

Divers would retrieve a final body from the shipwreck when weather conditions permit, said Rear Admiral Chareonpol Kumrasee, who helped lead the effort.

The monsoon season now under way can bring fierce squalls and high seas in southern Thailand, especially off its west coast, and questions have been raised about why the boat had set out to sea despite warnings of bad weather.

The captain of the Phoenix has been charged with negligence causing death, police said. He has denied the charges.

Religious rites for the dead were held throughout the week after families arrived in Phuket from China to identify relatives and take charge of survivors. 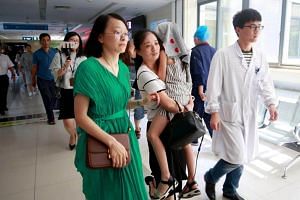 An onslaught of tourists is stressing out Thailand

The accident has led to a drop off in hotel bookings.

"We found that 10 to 15 per cent of advance hotel bookings in Phuket were canceled," said Thai tourism official Pongpanu Svetarundra.

Thailand's tourism sector, which accounts for 12 per cent of southeast Asia's second largest economy, has proved resilient to accidents, political turmoil and even bomb attacks over the past decade.

Chinese tourists made up nearly a third of last year's record arrivals of 35 million and more are expected this year, the tourism ministry says.

Two other boats capsized in the same vicinity as the Phoenix last week but their passengers were brought safely to shore.