BANGKOK - Thailand took a step closer to its high-speed rail project linking three airports in and near Bangkok with the signing of a public-private partnership on Thursday (Oct 24).

Expected to be built next year and to begin operations by 2024, the project covers a total distance of 220km and the trains can run at a maximum speed of 250kmh.

On the route from Don Muang Airport, trains will make several stops including at Pattaya, a popular beach town in Chonburi province, before reaching U-Tapao, home of the Thai navy's First Air Wing and Thai Airway's maintenance facility.

"It is a historic moment in Thailand that the private sector signed the PPP Agreement with the public sector to promote this mega construction project," said Supachai Chearavanont, CEO of Charoen Pokphand (CP) Group, which won the bid last November.

"Preparations for this project took two years. We've found partners whose strengths vary but are complementary," he added, referring to the group's partnership with Thai construction companies Italian-Thai Development, CH Karnchang, and foreign stakeholders like the China Railway Construction Corporation and Japan Bank for International Cooperation.

The Thai government has approved 119 billion baht for the development, while investment by the private sector will total 117 billion baht. Ownership of all assets will transfer to the state at the end of the 50-year agreement.

The project is expected to generate approximately 650 billion baht in economic returns, with 16,000 jobs created during the construction and more than 100,000 others in related businesses in the next five years.

Mr Zhou Lei, chairman of China Railway Construction Corporation (International), told The Straits Times he was confident the project would be completed in five years.

"The Chinese company is coming in with its equipment, with its technology, and we are ready to share and work together with Thais," said Lyu Jian, Chinese ambassador to Thailand.

"This project will be very useful for Thai engineers. When this line is built up it will speed up the transportation and facilitate trade between the two countries. So it's a win-win cooperation," he added. 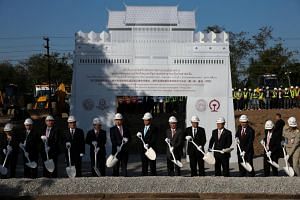 Apart from the project linking the three airports, another high-speed rail project is under construction between Bangkok and the north-eastern province of Nakhon Ratchasima and is scheduled to open in 2023.

The 253km line, the first-ever high speed rail project in Thailand, is the first phase of the Thai-Chinese high-speed rail plan that will link Thailand with China via Laos, a flagship Belt and Road Initiative project.

The second phase of the plan, a stretch of 335km from Nakhon Ratchasima to the north-eastern province of Nongkhai bordering Laos, was approved by the Cabinet in July.