BANGKOK - Thailand on Wednesday (Nov 27) postponed a controversial plan to ban two toxic farming chemicals, paraquat and chlorpyrifos, while reversing a planned ban on a third chemical glyphosate and permitting its restricted use.

This comes after protests and warnings both at home and abroad of the plan's disastrous effects on the livelihood of farmers and exports to Thailand.

Proposed by the Agriculture Ministry over health concerns, the ban on the three chemicals - often found in pesticides and insecticides - was originally to take effect from Dec 1. It was approved by the National Hazardous Substances Committee on Oct 22.

But the committee overturned the order on Wednesday, delaying the ban on paraquat and chlorpyrifos for six months to June 1, and permitting the use of glyphosate within current maximum residue limits.

The decision followed a public hearing earlier this month which revealed that 75 per cent of people are against the ban due to the short timeframe offered to those affected.

The ban means that no agricultural produce found with residue of the chemicals can be sold, which will create widespread ripple effects not only in Thailand but also on all imports to the country.

"If we impose the ban now, it will be chaos," Mr Anan Suwannarat, the permanent secretary of the Agriculture Ministry, told a media briefing. He promised to look into alternatives for the substances before the ban comes into effect.

Industry Minister Suriya Juangroongruangkit said: "We also found that it could cost us hundreds of billions of baht if we ban glyphosate now as we wouldn't be able to import soybeans from the US and Brazil."

Thailand is the world's second-largest exporter of rice after India. Its agriculture produce constitutes more than 8 per cent of the GDP. 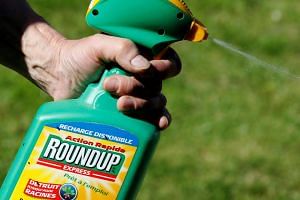 On Tuesday, up to 2000 farmers gathered in front of the Government House in Bangkok to demand a delay on the ban until there is a sound scientific study to determine if the substances are truly hazardous and until the government finds effective alternatives.

"The ban will lead to a nationwide food shortage crisis and gravely affect the exports of agricultural produce," said Mr Charuk Sriputtachart, a farmer representative.

According to Mr Charuk, the ban will affect up to two million farming households, leading to a threefold increase in production costs and between 20 and 30 per cent dip in overall agricultural produce.

It is expected to affect the employment of 12 million workers in the industrial, agricultural and food sectors, leading to economic losses worth an estimated 1.7 trillion baht (S$76.8 billion).

Fruit farmer Watsan Pipattanasukon, 72, told The Straits Times: "Another pesticide the government has encouraged us to use costs much more than paraquat but is not effective at all. I already tried. If the ban is imposed, I'm afraid I will go out of business."

"I've been using paraquat for decades and I don't have cancer. Nothing has happened to me. The government should have asked us first how we're doing before issuing the ban," he added.

When ingested, paraquat can cause lung congestion, convulsions and acute respiratory distress syndrome.

While it remains popular in many countries, the farming chemical is banned in several countries including the European Union, and its use is restricted in the United States. In South-east Asia, Vietnam banned the chemical in 2017 and Malaysia will do likewise in January 2020. Singapore is planning to put controls on 11 chemicals including paraquat in 2020.

Chlorpyrifos has been linked to low IQ, brain damage in children, and developmental and auto-immune disorders. It has been banned in eight EU member states and will be banned by the US state of California in February 2022.

Glyphosate is banned or restricted in 19 countries. Skin contact with the chemical can cause eye and skin irritation, as well as photocontact dermatitis. It is the main component of Roundup, one of the world's most popular herbicides produced by German company Bayer.

According to the US Environmental Protection Agency, there is no evidence that glyphosate is toxic to the nervous or immune systems and the chemical is not a developmental or reproductive toxin.

Thailand exports vegetables, fruits, nuts and plant parts to Singapore worth more than US$ 2 million each month, according to Thailand's Department of Trade Promotion.

"If measures are put in place that arbitrarily freeze all crop protection tools being imported into Thailand and take three essential products out of farmers' hands with no alternatives - while not approving any new technologies for over a decade - it's a recipe for disaster," said CropLife Asia executive director, Dr Siang Hee Tan.

In late October, US Undersecretary for Agriculture Ted McKinney asked Thailand to "postpone action on glyphosate" in a letter to Prime Minister Prayut Chan-o-cha.

In the letter, Mr McKinney urged Thailand to impose a maximum residue limit instead of a ban, which would affect US exports of soybeans and wheat to Thailand. Glyphosate is widely used in the US.

The US exported US$593 million worth of soybeans and US$180 million of wheat to Thailand in 2018, according to data from the US Department of Agriculture.

Aside from the health, agricultural and trade concerns, the issue is also political in that the ban is pushed by Deputy Prime Minister and Health Minister Anutin Charnvirakul, who vowed to resign if the ban falls through.

Leading the third-largest party in the government coalition with 51 elected MPs, Mr Anutin was a main voice behind the liberalisation of marijuana for medical purposes. His resignation will certainly affect the razor-thin majority of 252 seats the government has in the 500-member Lower House.