BANGKOK (REUTERS) - Thailand's long-delayed general election to end military rule will have to be postponed from its Feb 24 date and will likely be held in March, two officials in the Election Commission said on Tuesday (Jan 15).

The Election Commission of Thailand has not announced the postponement, but two senior election officials told Reuters it was impossible to hold the polls on Feb 24, as announced last month.

The military junta that has ruled for nearly five years had earlier suggested a one-month delay because of scheduling clashes with the coronation of the king in May.

"The February 24 election cannot take place because the Election Commission doesn't have enough time to organise it," a senior commission official said.

Coronation ceremonies for King Maha Vajiralongkorn have been scheduled for May 4-6, and the government said that there would be royal rituals taking place 15 days prior to and after those three dates.

"There will be an election before coronation," Prime Minister Prayut Chan-o-cha told reporters on Tuesday.

"We have to organise both things together, but we must give time to the coronation preparation first," Prayuth said.

The two largest political parties said they had no objection to the delay. 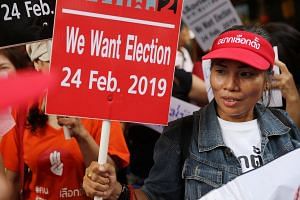 If there is nothing to hide, why ban election monitors?: The Nation

Under the law, the Election Commission has to endorse winning Members of Parliament within 60 days of a vote, and Parliament must convene within 15 days of the election results and the King will have to preside over the opening of Parliament.

The government says these political events could clash with ceremonies for the coronation.

The monarchy is revered in Thailand, and this year's coronation will be the first in living memory for most of the population.

King Vajiralongkorn, 66, has been serving since shortly after his father died in 2016 following a 70-year reign, but he has not been officially crowned during a lengthy mourning period.

The military government has repeatedly delayed holding a new election since it overthrew an elected prime minister in a 2014 coup.

Last month, the junta lifted a ban on political activities imposed since the coup, which allows political parties to start campaigning.

Dozens of activists protested against a possible delay of the election on Jan 6 in Bangkok, the first such gathering since the government lifted the ban on political activity.

Since then, there have been several similar gatherings in other parts of the country.