HUA HIN, Thailand (AFP) - An elegant resort town with royal heritage, Hua Hin looked more like a war zone than a tourist hotspot Friday (Aug 12), with bodies in the streets and blood on the pavement after a series of deadly attacks.

"This sort of thing does not happen here in Hua Hin," said Kevin Mcbeath, an Australian retiree who, like many residents of the upmarket town some 200 kilometres south of Bangkok, was shaken by the fatal attacks. 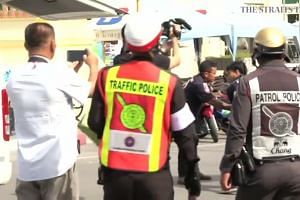 "(It's a) nice quiet place to retire, a lot of expats here," he told AFP, adding the bombings were "not good at all" for the popular holiday destination.

Both local Thais and foreign tourists usually flock to the peaceful town known for its chic hotels and pristine beaches, with the area busier than usual Thursday ahead of a major holiday weekend.

"I was a bit shocked," said Danish tourist Peter Klinge Kryger, 65, who was on holiday in Hua Hin and woken by the blasts.

"It's my holiday, I don't want to stay in my room everyday," he told AFP, adding he did not plan to let the bombings ruin his one-month trip to Thailand.

German, Italian, Dutch and Austrian nationals were among the wounded, according to staff at local hospitals, after the blasts tore through the popular main strip next to the beach.

The town's many bars and restaurants were shuttered Friday, as investigators behind police crime scene tape picked through the detritus for clues.

Some local residents laid floral tributes to the attacks' victims in a small public garden that was gutted by the blasts.

A street vendor's cart, mangled and twisted from the explosions, lay amid the wreckage, covered in soil from the plant pots where the bombs had been hidden.

Hua Hin is home to the revered royal family's summer palace, Klai Kangwon (Far From Worries) - and has long been a favourite retreat for King Bhumibol Adulyadej, the world's longest reigning monarch.

The 88-year-old is currently hospitalised in Bangkok for a number of health issues, a source of anxiety for many Thais and a key factor in the kingdom's past decade of political turmoil.

The bombings struck on the eve of Queen Sirikit's birthday - which analysts said made the attacks even more of a direct affront to the arch-royalist military government.

A parade marking the birthday went ahead Friday, just a few hundred metres from the first blast site.

Hours later, the second set of bombs went off.

"I was in the middle of the road. I heard an explosion, then a second one. Then I saw a body on the ground," said AFP photographer Munir Uz Zaman.

The night market - a tourist favourite - will be shut Friday, the city said, adding that checkpoints would be set up around the town.

"I saw many foreign tourists leaving already." The Hua Hin attack was one of a string of apparently coordinated bombings that have killed four and left 35 wounded across the country.

Two blasts struck Friday at Patong beach on the popular tourist island of Phuket while three more were reported further south - two in the southern town of Surat Thani, killing one, and one more blast in Trang, which also left one person dead.

Thailand's reputation as the "Land of Smiles" has come under strain in recent years due to political unrest and a number of high-profile crimes against foreigners.

But tourists continue to flock to its white, sandy beaches with the kingdom expecting a record 32 million visitors in 2016 - a bright spot in an otherwise lacklustre economy.