BANGKOK (AFP) - Thailand's monarchy is protected by one of the world's toughest royal defamation laws, making detailed discussion about the family's role almost impossible inside the kingdom.

Former Thai princess Ubolratana Rajakanya Sirivadhana Barnavadi's entry on Friday (Feb 8) as a candidate for prime minister in March elections raises questions about how the media can cover her campaign, and even how analysts or the public can discuss her publicly.

Here are some facts about lese majeste, or Section 112 of the criminal code, as it is known in Thailand.

What is the law and is the princess covered?

Under "112", anyone convicted of defaming, insulting or threatening the king, queen, heir or regent faces between three and 15 years in prison on each count.

Technically, the former princess would not be covered. She relinquished her royal titles after marrying an American decades ago, before divorcing and returning to Thailand.

She is however considered a member of the royal family and performs royal duties, and 112 has been routinely interpreted to cover any aspect of the monarchy.

Prosecutions under the junta have dramatically widened what counts as lese majeste, from an academic who questioned a 16th century royal elephant duel - the charges were later dropped - to a man prosecuted for satirical comments about the former king's dog. 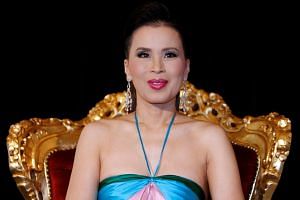 "Nothing in the law indicates that it can be used to encompass other figures, including past monarchs or historical narratives connected to past reigns," said Human Rights Watch's senior Thailand researcher Sunai Phasuk.

"In recent years, however, Thai authorities have interpreted the law increasingly broadly without apparent support in the text of the law."

How will coverage of the election be affected?

Ms Ubolratana is a public personality who has appeared in films and concerts and has an Instagram account. But given the way 112 has been broadly interpreted in the past, netizens and media outlets will think twice about what to publish.

"In the very near future we are going to see lots of self-censorship among the media, in the public and private sphere," said Dr Kanokrat Lertchoosakul, a political science lecturer at Chulalongkorn University.

Prosecutions under 112 skyrocketed after the May 2014 coup by the junta, which portrays itself as defenders of the monarchy. Some record-breaking sentences were handed down, the longest being 30 years in jail for a series of Facebook posts.

Anyone can make an accusation of lese majeste and the police are duty-bound to investigate. Under the current regime, many suspects are tried in closed military court and there is no avenue for appeal.

Critics say the law has been used to silence opposing voices. A cyber patrol team trawling the Internet for royal insults was reinforced after the coup as part of a crackdown on dissent.

What's the situation under the new king?

Convictions have declined in recent months, suggesting a change in attitude towards the defamation law under the rein of Ms Ubolratana's brother, King Maha Vajiralongkorn, whose coronation is set for May.

Six young Thais accused of setting portraits of the royal family on fire were granted rare acquittals in September, though they also faced a raft of other serious charges.

One expert said convictions had reached record lows in 2018 to the point where they were almost non-existent. There were four acquittals in 2018 and no new cases, according to legal monitoring group iLaw.

But many are still serving time or in self-exile after being accused of the offence.