BANGKOK (BLOOMBERG) - Thailand's King Maha Vajiralongkorn will be crowned in an elaborate ceremony on Saturday (May 4), capping a busy period in which he displayed a different approach from his father since taking the throne more than two years ago.

A budget of one billion baht (S$42 million) has been approved for the ceremony and two subsequent days of pageantry and royal appearances.

The 66-year-old monarch delayed the formal coronation until after a mourning period following the death of King Bhumibol Adulyadej in October 2016.

The ceremony comes at a tumultuous time in Thailand, during which King Vajiralongkorn played a prominent role.

He issued statements before and after an inconclusive March election that followed five years of military rule, a rare step in a country where top royals are officially treated as semi-divine and above the political fray.

Those comments - one of which rebuked former prime minister Thaksin Shinawatra, whose allies won the most seats in the election - mark a shift from the style used by late King Bhumibol during his seven decades on the throne.

Some of the world's strictest lese majeste laws hinder critical discussion of the monarchy in Thailand, where lengthy prison sentences have been given out in recent years for sharing news articles or social media posts with content deemed offensive. Politicians on all sides are reluctant to speak about the king, and must comply with any of his decrees.

"The military-backed government is highly responsive to the demands of the king," said Mr Kevin Hewison, an emeritus professor at the University of North Carolina at Chapel Hill.

Thai King pays homage to ancestors ahead of coronation

"He's a military man so he's big on rules and regulations. He's using legal mechanisms much more than his father. He seems to be legalistic in his approach to kingship."

Before the election, the King rejected his sister Princess Ubolratana Rajakanya's move to stand as a prime minister candidate for a party linked to Thaksin.

In a royal command, King Vajiralongkorn said that "the monarch and the royal family members are above politics".

The party, Thai Raksa Chart, accepted the King's decision, but was later disbanded by a court for hostility towards the constitutional monarchy.

On the eve of the election, King Vajiralongkorn released a statement that in effect asked citizens to back good people to govern the nation.

Pheu Thai, a party linked to Thaksin, won the most seats but fell short of a majority. It's vying with a pro-military party carved out of the junta, Palang Pracharath, to form a coalition government.

About a week after the poll, the King revoked Thaksin's royal decorations because the former prime minister fled Thailand in 2008 after being sentenced to prison. Thaksin has said the case was politically motivated since it was brought after the military ousted him in a 2006 coup, in part for insulting the monarchy. 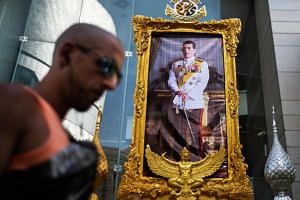 Thaksin or his allies won the most seats in every election since 2001, only to be unseated from government by the army or the courts, most recently in a coup in 2014. He described the March election as "rigged", although the Election Commission has said it's found no reasons to invalidate the polls.

"Some people may view the king's statements as legitimising one particular group," said Associate Professor Punchada Sirivunnabood, an expert in politics at Mahidol University near Bangkok.

The Election Commission has until next Thursday to certify the election results, and Parliament will convene within 15 days to begin the process of selecting a prime minister.

Junta leader Prayut Chan-o-cha, the pro-military party's candidate for prime minister, is seen as the favourite to return as leader because the 250-member Senate appointed by his regime votes for prime minister along with the 500-strong elected lower chamber.

Shortly after King Vajiralongkorn ascended to the throne in 2016, the military-appointed legislature approved changes to an interim national Constitution following suggestions from his office. The most notable adjustment allowed the king to travel abroad without temporarily handing over power.

King Vajiralongkorn also gained greater control of the Crown Property Bureau's billions of dollars in holdings. In the past, the bureau was described as managing and preserving crown property that was neither public property nor the private property of the monarch.

King Vajiralongkorn's stakes in Siam Commercial Bank Pcl and Siam Cement, two major listed Thai firms, are worth US$9 billion combined, according to the firms' websites and Bloomberg calculations. The full value of the bureau's real estate and other holdings isn't clear.

In Thailand, a white elephant fit for a new king

Just ahead of the coronation, King Vajiralongkorn appointed his consort Suthida Vajiralongkorn na Ayudhya as Thailand's queen, in an announcement that also said they had married. Little official information has been released about Queen Suthida.

The religious coronation ceremony at the Grand Palace will be the kingdom's first in nearly seven decades. King Vajiralongkorn will receive a purification bath on Saturday before being anointed and presented with the golden Great Crown and other regalia.

Over the following two days, the King will lead a royal procession in Bangkok's Old Town area to greet people and speak to the nation from a balcony at the grand palace in the capital. For the King, who also spends time in Germany, it will be one of his most prolific appearances since becoming monarch.

"Compared to his father, he's more distant from Thailand and Thai society," said Mr Paul Chambers of Naresuan University's College of Asean Community Studies in northern Thailand. "He takes a more assertive approach, being more directly involved in the administration."