BANGKOK (REUTERS) - Thailand's King Maha Vajiralongkorn, who will be officially crowned on May 4 as part of elaborate three-day coronation ceremonies, has been listed as the world's richest monarch by publications such as Business Insider in 2018.

His father, King Bhumibol Adulyadej, was also listed by Forbes magazine as the world's richest royal ruler in 2011, edging out the Sultan of Brunei.

Estimates of King Vajiralongkorn's personal wealth start at US$30 billion (S$41 billion), according to Business Insider.

That puts him among the wealthiest individual rulers, although when it comes to royal families, Saudi Arabia's tops the list with an estimated US$1.7 trillion, according an MSN Money report in 2019.

The Thai royal family ranked fifth in that list.

Reuters was unable to independently confirm those estimates. The Crown Property Bureau did not respond to Reuters'request for comment. The Bureau of the Royal Household did not respond to written questions about the value of royal assets.

The following is a look at some of the Thai king's most significant assets:

Most of King Vajiralongkorn's wealth is held in the Crown Property Bureau, which holds title to 6,560ha of land in Thailand, with 40,000 rental contracts nationwide, including 17,000 in the capital.

King Vajiralongkorn in 2017 placed the Crown Property Bureau under his direct control and later announced the removal of its tax-exempt status. 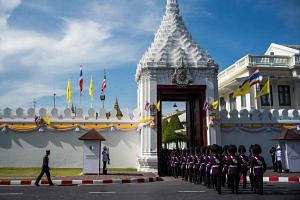 In Bangkok alone, the Crown Property Bureau owns 1,328ha of land, some of it prime real estate in the heart of the business district. Its property holdings in the Thai capital are estimated to be worth US$33 billion, according to a 2011 biography on King Vajiralongkorn's father, King Bhumibol, A Life's Work.

The king's private secretary, Air Chief Marshal Satitpong Sukvimol, was appointed chairman of the Crown Property Bureau in 2017, a position previously held by the Finance Minister.

Since the king took control of Crown Property Bureau, some US$4.7 billion in new developments have been announced on land it owns, based on company announcements.

Property developers have stepped up investment on Crown Property real estate in recent years with the latest in April, when mall operator Central Pattana Pcl and hotelier Dusit Thani announced the US$1.2 billion residential, retail and office project Dusit Central Park on a 67-year lease on 3.68ha. It is expected to be completed in 2024.

In 2018, TCC Group and Fraser Property, both controlled by billionaire Charoen Sirivadhanabhakdi, announced the US$3.5 billion One Bangkok.

The mixed-use project, on 16.7ha with a lease to 2083, is expected to complete its first phase in 2022, according to Fraser Property.

In a statement last year, the Crown Property Bureau announced assets previously registered to Crown Property would be held in the King's name, placing shares worth some US$9 billion in companies Siam Cement Group and Siam Commercial Bank among his personal assets.

Both companies were founded by royal decree in the 1900s.

Siam Commercial Bank and Siam Cement did not respond to Reuters' requests for comment.

Among Thailand's crown jewels is the 545.67-carat brown Golden Jubilee Diamond, the largest faceted diamond in the world. Its value is estimated at up to US$12 million by The Diamond Authority, a jewellery website.

It was presented to King Bhumibol Adulyadej, in 1996 to mark the 50th year of his reign, according to the Gem and Jewelry Information Centre, an industry body in Thailand. 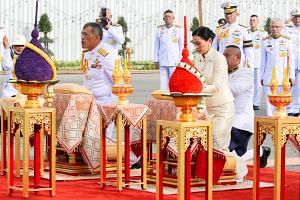 Thai King pays homage to ancestors ahead of coronation

On coronation day, the King will also be presented with five royal instruments, including the 7.3kg golden Great Crown of Victory, which in inlaid with gems and topped by a large diamond from Kolkata, India.

The other priceless regalia are also adorned with diamonds and set in gold enamel, each steeped with history and cultural significance.

While the Crown Property Bureau's 17,000 Bangkok rental contracts cover everything from government agencies to shophouses, some of the most visible holdings are the land on which some of the best-known shopping malls are built.

Siam Paragon shopping centre, Siam Discovery and Siam Centre, all of which rest on Crown Property land, drew in some 200,000 shoppers per day last year.

The Crown does not run the malls but collects an unknown amount of rent from their operator, Siam Piwat, which also opened the US$1.7 billion luxury mall, IconSiam, last year on its own land.

Siam Piwat did not respond to a request for comment.