BANGKOK (REUTERS) - Thai Prime Minister Prayut Chan-o-cha is "interested in politics," he said on Monday (Sept 24), a sign that he sees a public role for himself after a general election promised next year.

May next year is the most recent deadline General Prayut's junta has set for a vote its critics hope will return Thailand to civilian rule after more than four years of military rule, although it has repeatedly pushed back the timeline.

Critics say the military aims to maintain its grip on power beyond the election and they point to a military-backed constitution that limits the authority of civilian politicians.

"I can say right now that I am interested in politics," Gen Prayut, who has previously sidestepped questions about his political future, told reporters on Monday.

"Because I love my country, like all Thai people," he said. He did not elaborate on his comments.

As army chief, Gen Prayut, 64, led a 2014 coup that ousted a civilian government to end a prolonged period of sometimes deadly unrest.

Technically Gen Prayut cannot stand for election under the constitution, because he would have had to resign from his post since 2017 to do so. Gen Prayut said on Monday he did not intend to quit as junta chief. 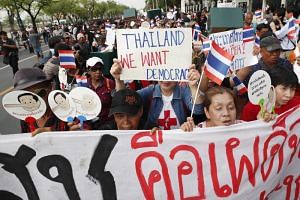 However, Gen Prayut could return as prime minister if a political party nominated him as its front-runner.

He could be chosen as an "outside prime minister" if 500 members, or two-thirds of the House of Representatives and the Upper House Senate, voted to kick-start the process, if the winning party's candidate failed to get enough votes.

Watana Muangsook, a member of the opposition Puea Thai Party, welcomed Gen Prayut's participation in the next election but said he must first give up his post as junta chief.

"You may join whichever party, but you should resign as junta chief to lay down your weapons and play fair like everybody else," Watana told Reuters.

The junta, formally known as the National Council for Peace and Order, has promised to relax its curbs on political activities before the vote, to allow political parties to complete administrative tasks between September and December.