CHONBURI, THAILAND (AFP) - Itthipol Khunpluem grabs the microphone, bounds onto the stage and flashes a winning smile as he works the crowd gathered for a final rally: "Chonburi... show me your hands!" he says to wild applause.

But he need not have bothered. The feared and revered Khunpluems have run eastern Chonburi province for decades and - like the other "godfathers" who preside over swathes of Thailand - carry voter loyalty wherever they go.

This time, the Khunpluems have thrown their lot in with Phalang Pracharat, the party of the Thai junta which is seeking a return as a civilian government after Sunday's (March 24) general election.

In an unpredictable poll whose outcome has pundits in a spin, Chonburi's eight seats could prove invaluable to a potential junta-led coalition.

"We are confident of winning," Mr Itthipol told AFP, chuckling at the question of where the political loyalty of his family truly lies after years of taking posts in governments of all stripes.

"We are on the side of the people... and not the parties who divide the people by promising democracy or dictatorship."

The Khunpluems are the source of local power in Chonburi province, south-east of the capital Bangkok.

They are gatekeepers to political office, fixers of problems and businessmen whose name has been earned through cultivation of their constituents and a reputation for ruthlessness with their rivals.

The smooth, United States-educated Itthipol, a two-time former mayor of Thailand's boisterous sex capital Pattaya, was hired to advise the junta in early 2018 as it raced to cement pre-election alliances.

The junta installed his gruffer older brother Sonthaya as mayor of Pattaya, while the notorious family patriarch was freed early from jail on a murder conviction.

The family's vote bank is with the junta, for now.

In return, the Eastern Economic Corridor (EEC), Thailand's biggest ever investment scheme worth nearly US$60 billion (S$80 billion), has been signed off, promising to upgrade the Khunpluems' patch into a tech, industrial and state-of-the-art tourism hub. 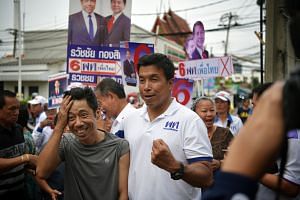 The Khunpluems are among the most famous of Thailand's influential families.

Father Somchai - nicknamed "Kamnan Poh", as kamnan is a term for a head of a cluster of villages - is a storied bootlegger and smuggler turned local bigwig.

He carved out the family name and built a political and business empire, which sweeps in the lucrative resort town of Pattaya, visited by millions of tourists each year.

"He is a real 'godfather', he does exactly what he says... he helps his people the very best he can, and he competes his hardest against his opponents," a veteran Pattaya politician told AFP, requesting anonymity.

Kamnan Poh was given a 25-year sentence for masterminding the 2003 murder of one of those opponents, a business rival.

But he made a dash across the Cambodian border before he could be arrested.

His impunity ended in 2013 when he was caught at a tollway in Thailand.

But in late 2017, as the junta came knocking for Khunpluem support, he was suddenly freed early on medical grounds. Months later, his family was working for the military.

The murder conviction of the head of the Khunpluem clan has not dimmed the family's star power in Chonburi.

"Two tigers can't share the same cave... it's up to one to make the first move," explained the Pattaya official of the conviction. "Thai politics is unfortunately like this."

The Khunpluems' revival is part of a wider junta move to reach out to local fiefs.

Initially after its 2014 coup, the military turned the screw on powerful clans, as it hollowed out local political power structures across the country, putting in its pointmen.

But it has now turned to them for electoral support.

"They (the influential families) are going to come back again for this election," says Thailand expert and historian Chris Baker, of a patronage system which has corroded local democracy in the South-east Asian nation.

But in the absence of stable government - Thailand is stuck on a merry-go-round of coups and short-lived civilian administrations - families like the Khunpluems are lauded by many in their communities.

Several people at a enthusiastic rally in Chonburi town on Thursday evening said they would defy their political instincts to vote for the junta-linked party on Sunday.

"No matter what, I support the Khunpluem family," said 60-year-old Jidapa Kerdpol, bouncing a placard with Itthipol's face on it as music blared.

"They have done everything for Chonburi."