BANGKOK (REUTERS) - Honking car horns and live "selfie" videos - this is how some Thais in the northern city of Chiang Rai and beyond celebrated on Tuesday (July 10) after all 12 boys and their soccer coach had been safely rescued from a labyrinthine cave complex.

The dramatic rescue marks the end of a more than two-week ordeal which began when the "Wild Boars" team and their coach became trapped inside the flooded Tham Luang cave on the border with Myanmar on June 23.

"This is an important event in my life. It is something I will remember," said a visibly emotional Rachapol Ngamgrabuan, an official at Chiang Rai's provincial press office.

"There were times when I cried," he added. "Happy. Very happy to see all Thai people love each other."

Thais have been glued to their televisions, mobile phones and computer screens following every twist and turn of the boys'story, as have many people overseas.

Thais turned to social media on Tuesday to show their elation using the hashtag #Hooyah, a word used by the navy to build morale. Other hashtags included #Heroes and #Thankyou. 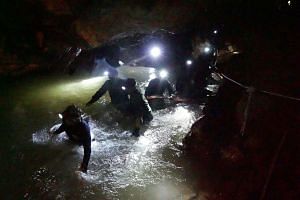 "You are our heroes!" wrote some, captioning cartoons showing the boys and their coach with dozens of rescue workers, volunteers and military personnel.

On Monday, Prime Minister Prayut Chan-o-cha said he would host a celebration for all of those involved in the multinational rescue effort.

"We will host a meal for all sides," said Prayut.

Top Thai retailers including Central Group and The Mall Group also chimed in to show their support.

"We are not sure if this is a miracle, a science, or what. All the thirteen Wild Boars are now out of the cave," the navy SEAL unit wrote on its official page moments after the rescue.

Britain's Manchester United football club said on its official Twitter page that it was relieved to learn that the 13 were safe and extended an invitation for the group and their rescuers to visit its Old Trafford stadium.

#MUFC is relieved to learn that the 12 footballers and their coach trapped in a cave in Thailand are now safe. Our thoughts and prayers are with those affected.

We would love to welcome the team from Wild Boars Football Club and their rescuers to Old Trafford this coming season. pic.twitter.com/5CGMoD1Msq