BANGKOK (AFP) - A Thai anti-junta activist who spent more than two years behind bars for insulting the country's monarchy by sharing an unflattering BBC article about the king walked free on Friday (May 10) on a royal pardon.

"I'm not angry with anyone, I only love democracy and freedom," he said in a video broadcast on Facebook, adding that he would continue with his activism.

The pardon comes days after King Maha Vajiralongkorn was crowned over the weekend in Thailand's first coronation in 69 years.

The country has some of the harshest royal insult - known as lese-majeste - laws in the world and each count carries a maximum prison term of 15 years.

The law, or article 112, makes scrutiny of the wealthy and powerful royal family all but impossible inside the kingdom - including by the media who have to heavily self-censor.

Mr Jatupat was found guilty after sharing a profile of King Maha Vajiralongkorn written by the BBC's Thai-language service in London.

The profile contained details of 66-year-old Vajiralongkorn's personal life that are well known inside the kingdom but rarely printed by the Thai press. 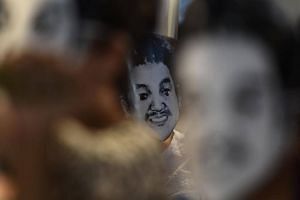 It was shared more than 2,000 times but Mr Jatupat was the only person prosecuted.

Another pro-democracy activist who shared the article fled the country after facing similar charges.

Mr Jatupat expressed gratitude to King Vajiralongkorn for the pardon.

"It's the mercy of the king and I am grateful."

Photos show a smiling Mr Jatupat hugging family members.  He was wearing dark shorts and a yellow shirt. The colour yellow is associated with the king’s birthday.

The activist was the first to be detained after King Vajiralongkorn ascended the throne following the death of his beloved father Bhumibol Adulyadej in 2016.

Lese-majeste convictions shot up under the arch-royalist junta that seized power in a 2014 coup, but analysts say the trend has reversed under King Vajiralongkorn.

Those charged with lese majeste in Thailand are almost always convicted, often behind closed doors.

Mr Jatupat had originally been sentenced to five years but the sentence was halved after he pleaded guilty.

His lawyer said the sentence would have ended on June 19.

About 30,000 to 50,000 prisoners are expected to be released under royal pardons and many will have sentences reduced, according to the corrections department.