KUALA LUMPUR (AFP) - Terrorism and territorial tensions are expected to dominate discussions when Asia-Pacific leaders reconvene for a fresh round of summitry in Malaysia on Saturday (Nov 21).

US President Barack Obama and his counterparts from China, India, Japan and elsewhere meet in Kuala Lumpur for two days of talks hosted by the 10-country Association of Southeast Asian Nations (Asean).

The summit marks Round Two in a week of top-level meetings in the region that kicked off in Manila with the 21-member Asia-Pacific Economic Cooperation (Apec) gathering in Manila.

Apec ended with an urgent call for global cooperation in the fight against terrorism following the attacks in Paris by Islamic State in Iraq and Syria (ISIS) group adherents that killed 129.

Further expressions of resolve are expected in Kuala Lumpur in the wake of the seizing of dozens of hostages in Mali in a new drama.

In Manila, Obama called on China to cease the island-building - which has stoked concerns of a violent confrontation - and announced hundreds of millions of dollars of new aid to regional allies.

China insists it has sovereignty over virtually all the South China Sea, which also is claimed in part by a handful of other countries.

The Kuala Lumpur meeting includes an Asean summit that will declare the establishment on Sunday of an "ASEAN Economic Community" (AEC), inspired by the European Union single economic market. 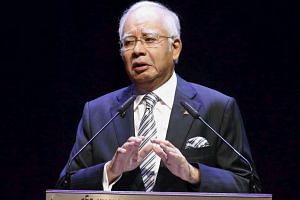 That will be one step closer toward an envisioned single Southeast Asian market with free flow of goods, capital and skilled labour across borders.

But the AEC as a reality remains far-off due to significant non-tariff barriers, vested interests, and large development gaps between member-states, and the declaration is largely symbolic.

Asean leaders will also sign a new convention against human trafficking, after the region was shaken by a refugee crisis earlier this year, including the discovery of brutal camps in Thailand and Malaysia.

The meetings will expand on Sunday into a wider gathering bringing in big powers like the United States, China and Russia.

Further discussion of the new 12-country Trans Pacific Partnership trade pact spearheaded by the United States - which hopes to push signatory countries to ratify the deal at home - also is expected.

Any breakthrough on Southeast Asia's perennial problem of hazardous smoke from Indonesian forest and agriculture fires is unlikely, however, with Asean environment ministers failing to come up with new measures at a meeting earlier this month in Hanoi.

Rainy-season storms only recently curbed an outbreak that was one of the worst ever, choking vast stretches of Southeast Asia, sickening hundreds of thousands, and triggering renewed anger at Jakarta for failing to control the environmental and health menace.