BANGKOK - The suspicious object found at Bangkok's Suvarnabhumi Airport on Thursday night was not a bomb, Thai police said on Friday (June 10).

"We went to the location and examine the object. It is not a bomb," Police captain Phurit Sawatrat from the airport's police station told The Straits Times.

He said a woman who was jogging near Novotel hotel in the airport's compound at around 5.30pm spotted the object and reported it to the authorities. 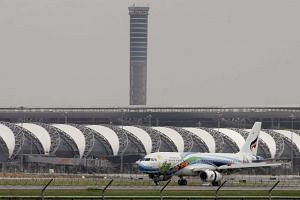 Explosive ordnance experts removed the items after examining it.

Political conflict has occasionally triggered violence in the Kingdom's turbulent history, including during the last round of street protests which paralysed the previous Puea Thai-party run government and led to the 2014 coup that ushered in the current junta.

While Thailand's southern border provinces have been battered by a largely localised separatist insurgency, the South-east Asian region as a whole has had to confront the growing spectre of Islamist terrorism.

A string of blasts took place last year. In February, two small improvised explosive devices exploded in the walkway linking a skytrain station to Siam Paragon shopping mall in downtown Bangkok. One month later, a grenade was flung outside the Criminal Court in Bangkok.

In April last year, a car bomb went off in the basement car park of Central Festival mall on the southern holiday island of Koh Samui. Seven people were injured in that blast.

The most deadly attack, however, occurred last August when a bomb that went off near the popular Erawan shrine in Bangkok's Ratchaprasong intersection killed 20 people, including one Singaporean.

Two Uighurs from China's restive Xinjiang region are currently on trial over this case.

Meanwhile, the country is due to conduct a referendum in August on a draft Constitution which critics argue will cement military control over the political system, raising fears of further unrest.