KUALA LUMPUR (THE STAR/ASIA NEWS NETWORK) - Eight more people have died of methanol poisoning in a spate of cases believed to be caused by bootleg liquor, bringing the total death toll to 29, Malaysia's Health Ministry said on Friday (Sept 21).

Six of the latest victims were from Kuala Lumpur and two from Selangor, director-general of health Noor Hisham Abdullah said in a statement.

Of the 29 deaths, 18 were recorded in Selangor, nine in Kuala Lumpur, and two in Perak.

Thirty-three patients remained in hospital, of whom 19 were in critical condition.

Cheap, homemade liquor is popular among poor, migrant workers in Malaysia, which has high taxes on alcohol.

A total of 10 people have been detained in Selangor over the suspected poisoning, and raids have been conducted to seize suspect alcoholic beverages, police said separately on Friday. 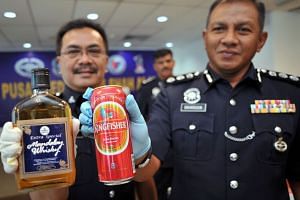 Drinks that were suspected to be the cause of alcohol poisoning were the Grand Royal Whisky, Mandalay Whisky, Joker Whisky and Kingfisher and Volcano beers.

Most of the victims had shown early signs of methanol poisoning, including stomach aches, nausea, vomiting, headaches and blurred vision with some developing shortness of breath, cramps and sudden unconsciousness.

India-based Kingfisher said it will submit a list of ingredients to the Health Ministry as part of the ongoing probe.

"We don't know how Kingfisher was implicated in the case but I can confirm we have nothing to do with it," V. Shashikanth, a spokesman of the brewer, United Breweries Limited, said on Friday.

He said bootleg versions of Kingfisher beer have been sold in Malaysia.

"We detected this more than eight months ago. We have worked with the authorities to curb the sale of counterfeit beer. The sales of such beer have declined significantly," he said.

"The real one has a manufacturing and expiry date along with a batch number while the fake ones only have an expiry date," he said, adding that authentic Kingfisher beer has the profile of a bucket on the ring pull while fake ones feature only a loop.