JAKARTA - The suicide bomber who was killed on Tuesday (July 5) during an attack on a local police station in Solo city had learnt to build bombs from Bahrun Naim, an Indonesian militant aligned to the Islamic State in Iraq and Syria (ISIS), The Straits Times has learnt.

A source close to the investigation of the latest terror attack in Indonesia had identified the perpetrator as Nur Rohman, a 30-year-old local man from Sangkrah, a village in Solo, also known as Surakarta.

National police chief Badrodin Haiti had also hinted at an earlier press conference that the bomber could be Nur Rohman, but he said it will take two days for DNA testing to confirm his identity. 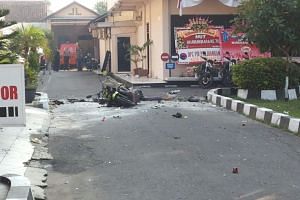 According to the source who asked not to be named, Nur Rohman has been on the wanted list for an attempted terror attack in December last year.

He is believed to be a member of a local terror cell led by Indonesian militant Arif Hidayatullah, who is also known as Abu Musab.

Arif was arrested on Dec 23 in Bekasi on the outskirts of Jakarta, with another man named Ali, a Uighur who was being primed as a suicide bomber in an attack planned for that same month.

The Straits Times had reported then that two bomb-makers in the cell had escaped during the police raid that nabbed Arif and Ali. The fugitives were said to have been on the run with ready-to-use improvised explosive devices (IEDs).

Arif is now in a maximum detention facility in Kelapa Dua, located not far from Jakarta.

He had testified earlier that Nur Rohman was the only one who escaped the raid and was in possession of a homemade bomb.

According to the source, Nur Rohman had received instructions on how to assemble an IED from Bahrun via Telegram, a web-based messaging smart-phone application.

On Tuesday morning at about 7.30am local time, the suicide bomber on a motorcycle was about to rush into the police station when he was intercepted by officers nearby and blew himself up.

A police officer, identified as Bambang Adi Cahyanto, was wounded in his left eye and suffered burns to half of his body. He is now in stable condition and recovering at Surakarta Hospital, said a police spokesman.