PUTRAJAYA - Malaysia police have counted RM109 million (S$36.8 million) worth of cash so far from a third of the 72 trolley bags seized from premises linked to former prime minister Najib Razak, according to a Chinese-language newspaper.

China Press reported on Wednesday (May 23) that the cash was in various denominations and counted from 27 bags, from some 72 seized in six properties including Datuk Seri Najib’s private residence.

The cash that has been counted were placed in 15 boxes and transported to the central bank, the report said, quoting unnamed sources.

"It involves many different currencies so the process is very tedious."

"Police personnel must also record each banknote seized," said a source, as reported by The Star.

On Monday, officers at the CCID office at Menara 238 in Jalan Tun Razak had begun counting the cash early in the morning.

Inspector-General of Police Mohamad Fuzi Harun confirmed that the counting process had not been completed.

Asked if more people were expected to be called up over the investigation, he said the police would do so should there be a need.

"The police must be given time to thoroughly investigate the matter," he said, as reported by The Star. 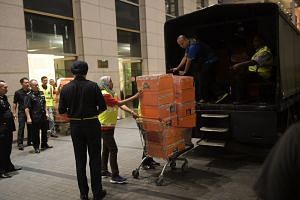 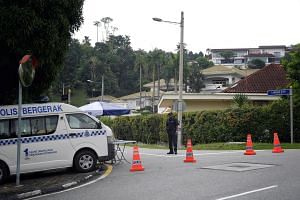 A team from the Malaysian Anti-Corruption Commission (MACC) visited his house and office in Baling town in Kedah on Tuesday, The Star reported.

On speculation that RM500 million was found with him, Datuk Seri Azeez told The Star: “They only took RM500,000 and that was from my Baling Umno allocation and about seven pieces of my wife’s jewellery.

“The jewellery has been with us for more than 30 years since our marriage and I guess it’s worth around RM50,000. My wife is not a jewellery person lah,” he quipped.

Meanwhile, on reports that Mr Najib had lodged a police complaint saying that he feared threats against his life and those of his family, Tan Sri Mohamad said police had placed enough personnel for his security.

He said: "We have and will always ensure the safety of all, including the former prime minister.

"If there is a need to increase security, then we will look into it."

Last Friday, police had seized 284 boxes filled with designer handbags, watches, jewellery and cash in various currencies from three luxury condominiums here, the value of which was impossible to estimate due to its sheer volume.

The raids were part of police investigations into 1MDB.

This followed a check on six locations linked to Mr Najib, including the Prime Minister's Office, his official residence as well as other premises.

In a police report, Mr Najib had claimed that the cash seized from the Pavilion Residences were donations from his friends and meant for Barisan Nasional's election campaign.

Lawyer Andrew Khoo said Mr Najib would now have to prove his claims by stating the source and the amount of the money he received as donations.

Even then, he would still need to prove that these donations were not a corrupt practice and that they were not received for ulterior or improper motives, said Mr Khoo.

He said the problem now was that Malaysia's system of political donations was unregulated and the source of money unknown.

"They can show that it has not come from unlawful activities. So, if the donation can be linked back to proceeds of criminal activity, then it is 'dirty money'," he said.