KUALA LUMPUR (REUTERS) - South-east Asians have united to defend the hugely popular "chicken rendang" that was knocked out of a British cooking competition television show for not being crispy enough, but the longstanding debate on the origins of the dish rages on.

Malaysian-born chef Zaleha Kadir Olpin cooked nasi lemak, a beloved traditional Malaysian dish, served with chicken rendang in the quarter-final of the BBC show MasterChef UK, in which contestants were asked to prepare a meal that was important to them.

The show's judges John Torode and Gregg Wallace turned down the chicken accompaniment saying the skin wasn't crispy, stirring fury on social media and a viral debate in Malaysia, Indonesia, Singapore and Brunei, where the spicy dish is widely loved.

"Chicken rendang should be made authentic. And it is just stupid for it to be crispy," said Mr K.F. Seetoh, founder of Makansutra and an Asian street food expert based in Singapore.

"Saying chicken rendang should be crispy is like saying that hamburgers should be boiled."

Rendang is traditionally made with chicken or beef that is slow cooked with Asian herbs and coconut milk.

"Chicken rendang is a dish that many of us grew up with. And to have an angmoh (Caucasian) tell us how the dish should be like is a smack on our face," said Mr Haikal. 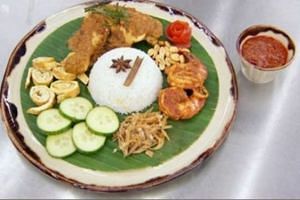 Malaysian Prime Minister Najib Razak waded into the debate on Tuesday saying no one eats crispy chicken rendang - and veteran leader Mahathir Mohamad for once agreed with his arch rival.

Corporates were not to be left out.

In a cheeky Instagram post with a bucket of their classic fried chicken, KFC said: "The only thing that should be crispy is our fried chicken."

However, the jury is still out on which country owns the dish, with neighbouring Indonesia also claiming it. Some suggest the first version of rendang was in Padang, West Sumatra, Indonesia, some 600 years ago.

Mr Torode riled Malaysians by suggesting on Twitter that chicken rendang was from Indonesia, and ending his tweet with "namaste", an Indian greeting.

"I don't know what's wrong with these Malaysians keep saying Rendang theirs, it's like the Koreans claiming Japanese ramen," said one post on Twitter. Many other Indonesians were quick to agree.

Mr Haikal from Alma said there were different versions of the dish.

"In the region and the Malay archipelago, it (rendang) is made by different people including Singaporeans, Malaysians, Indonesians, and even in Thailand, there is a dish called massaman, which actually tastes really similar to the chicken rendang too," he said.