JAKARTA - Lawmakers from South-east Asian nations have called for all charges against Philippine journalist Maria Ressa to be dropped.

Ms Ressa, chief executive officer and executive editor of the news site Rappler, was arrested on Wednesday (Feb 13) on a cyber libel charge that carries up to 12 years' imprisonment.

She was freed on bail on Thursday amid international censure and allegations that she is being targeted over her news site's criticism of President Rodrigo Duterte.

"These flimsy charges are clearly politically motivated. Maria Ressa's arrest is the latest in a long line of attacks on independent media in the Philippines, which is reeling from sustained harassment under the administration of President Rodrigo Duterte.

"It shows the extent to which the Philippine government is willing to go in its bid to silence critics within the media. All charges against Maria Ressa must be dropped immediately," Asean Parliamentarians For Human Rights (APHR) chairman Charles Santiago, a member of the Malaysian Parliament, said in a statement on Thursday.

Ms Ressa is accused of cyber libel over a 2012 Rappler article, which was updated in 2014, that linked a Filipino businessman to murder, human trafficking and drug smuggling. Rappler cited information contained in a 2002 intelligence report but did not say which agency compiled it.

"This latest charge is part of ongoing judicial harassment against Rappler and its staff. The Philippine government must stop abusing laws in an attempt to intimidate journalists who are merely doing their jobs," said Mr Santiago.

In spite of these attempts, the APHR noted the robust and commendable response from the wider Philippine press and journalist community, many of which came out quickly in solidarity with Ms Ressa, denouncing her arrest as politically motivated and calling for her release. 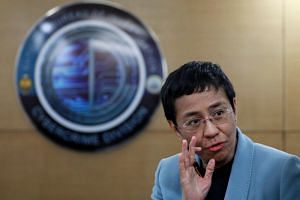 Maria Ressa arrested: Why the arrest of a journalist in Manila will echo around the world

The organisations also highlighted the "absurdity" of the arrest, stating that charging Ms Ressa for an article that came out before the Cybercrime Prevention Act came into force, risked making the Act itself "unconstitutional", as it would be an "ex post facto law".

"This is an outrageous escalation in a growing war on the free press globally and specifically against a brave journalist," said Mr Callaway.

Amnesty International called the cyber libel case "yet another absurd legal attack" that amounted to harassment.

Added Mr Santiago: "Freedom of information is crucial in any functioning democracy and safeguards a citizen's ability to make an informed choice about their own future. Governments need to recognise the vital role independent media outlets play and take all necessary steps to ensure a safe environment for journalists to work without undue interference."