SINGAPORE/HONG KONG (REUTERS) - Roiling tensions in the South China Sea are set to dominate Asia's biggest security summit starting in Singapore on Friday (June 3), exposing a deepening rivalry between the United States and China ahead of a landmark legal ruling in the Hague.

The unofficial Shangri-La Dialogue (SLD) is the last chance for the two powers to drum up support before a decision from the Permanent Court of Arbitration in a case brought by the Philippines.

Manila is contesting Beijing's claim to an area shown on its maps as nine-dash line stretching deep into the maritime heart of Southeast Asia, covering hundreds disputed islands and reefs.

Security experts expect the United States will try to convince Southeast Asian countries, as well as other big powers such as India and Japan, to publicly support any positive decision for the Philippines, who has asked the court to recognise its right to exploit waters in the South China Sea.

China, which rejects the court's authority, will try to sway the countries to abstain from taking a public position, which should make it easier to stave off criticism from the West. 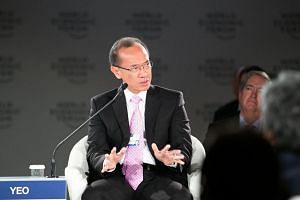 "The value of the case is the long term reputational damage and the pressure ... on the Chinese. That only works if you have a big coalition that can keep this in the public eye," said Greg Poling, director the Asia Maritime Transparency Initiative at Washington's Center for Strategic and International Studies think tank. "But if the Chinese ... get a ton of countries to abstain that deflects a lot of that criticism."

Among the 20-odd delegations, much attention will be on the positions of Southeast Asian countries. Regional players haven't always agreed on how to tackle China's claims in the South China Sea, struggling to balance their security interests with their deep ties to the world's second largest economy.

As well as China and Taiwan, the Philippines, Vietnam, Malaysia and Brunei have rival claims in the increasingly militarized area. The United States has also stepped up patrols and exercises, stressing the need to keep international sea-lanes open.

"Regional states want to have positive relations with China yet at the same time ... strategically they are aligned with the West and they have reasons for being cautious about China's behaviour in the region." The three-day summit offers a rare chance for regional military brass and intelligence officers, and their civilian leaders, to openly debate regional defence trends and tensions.

The summit comes amid other significant strategic shifts in the region, particularly the recent election of tough-talking Rodrigo Duterte in the Philippines and the recent lifting of the US arms embargo on former enemy Vietnam.

The agenda also includes the rising tensions surrounding North Korea, which conducted its fourth nuclear test in January and followed that with a satellite launch and test launches of various missiles, which brought new sanctions.

The isolated country attempted to fire a missile from its east coast this week but the launch appears to have failed.

Other topics of discussion include the threat of radical militants in Southeast Asia, as well as cyber-security, which has become a hot topic after major bank heists from Bangladesh to Ecuador.

"Only a meeting of minds can solve or mitigate these challenges and as host, we will make sure that leaders get full opportunities to engage each other," Singapore Defence Minister Ng Eng Hen said on his Facebook page.