The European Medicines Agency and Britain's Medicines and Healthcare Products Regulatory Agency said they found rare cases of blood clots among some adult vaccine recipients, although they added that the vaccine's advantages still outweighed the risks.

Here is a look at how some countries are guiding usage of the vaccine.

Australia now recommends the use of Pfizer’s Covid-19 vaccine for people under the age of 50. It will continue to  administer the AstraZeneca vaccine to people over 70.

Italy is recommending the use of the AstraZeneca vaccine for people over 60 years of age. Those under 60 who have taken a first shot can also take a second one. Italy had originally limited the vaccine to people under the age of 65 because trials showed it offered less protection against Covid-19 than other vaccines. On March 8, its Health Ministry said the shots could also be administered to those over 65.

Spain will only give AstraZeneca vaccine to people over 60 years old. Health Minister Carolina Darias said a decision will be taken on Thursday on whether to administer the second round of the vaccine to people who have already received their first dose. The Spanish region of Castile and Leon had earlier suspended AstraZeneca vaccines as a precaution.

Britain advised most people under 30 to get an alternative vaccine to AstraZeneca if possible. The alternatives in Britain are vaccines from Moderna and Pfizer-BioNTech.

Belgium on Wednesday announced that it is restricting AstraZeneca's vaccine to those over 55 only. Its Health Ministry said the change "will have little to no impact on the vaccination campaign under way, as elderly people are currently being vaccinated".

From March 31, Germany limited use of the shot to people over 60 and high-priority groups, following reports of a rare brain blood disorder. On April 1, Germany's vaccine commission recommended that people under 60 who have had a first shot of AstraZeneca's vaccine should receive a different product for their second dose.

Norway will delay a decision over the use of the vaccine, the authorities said on March 26, with a decision expected by April 15.

Denmark was the first country to suspend use of the AstraZeneca jab in March following reports of the formation of blood clots in some people who had been vaccinated. A local survey indicated that one in three Danes would decline to get the shot.

Sweden paused the use of the AstraZeneca vaccine in March after reports of rare but serious blood clots among people vaccinated with the AstraZeneca shot. Sweden later resumed its use for people over 65. The Swedish Medical Products Agency said on Wednesday that the benefits of the AstraZeneca Covid-19 vaccine outweighed the risks.

The authorities in Canada are reviewing the new guidance from the European Medicines Agency, as well as information submitted by AstraZeneca, and will determine further steps later, federal health ministry spokesman Anna Maddison wrote in an e-mail. Canada had suspended plans in late March to give the vaccine to people below the age of 55, citing blood clot concerns.

Brazil's health regulator, Anvisa, recommended continued use of the vaccines, saying that the benefits outweighed the risks. Brazil has administered more than four million shots of the AstraZeneca vaccine to date, and has registered 47 adverse clotting events. The agency said it was impossible to establish whether the clotting was linked to the vaccine, nor could specific risk factors be identified.

Mexico's drug regulator said on Wednesday it has no current plans to limit use of AstraZeneca's vaccine. Mexico has so far acquired 3.5 million doses of the vaccine.

A day after temporarily suspending giving AstraZeneca's vaccine to people below 60, South Korea said it will decide this weekend whether to resume the shots. The country has reported three cases of blood clots from people who received the vaccine.

Malaysia will deliberate and decide whether it will administer the AstraZeneca vaccine as planned. Science, Technology and Innovation Minister Khairy Jamaluddin said the Special Committee on Covid-19 Vaccine Supply will take the European Medicines Agency's announcement into consideration.

The Philippine health authorities on Thursday temporarily suspended the use of Astrazeneca's vaccine for people aged below 60 to investigate reports of blood clots coming from overseas. The Philippines has received 525,600 doses of AstraZeneca's vaccine, about a fifth of the country's total inventory, through the Covax facility. So far, there are no reports of adverse side effects. 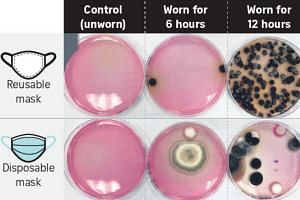