SINGAPORE - A photo of the name tag the late Johor Prince Tunku Abdul Jalil Sultan Ibrahim wore during his stint at the Singapore Zoo has been circulating on social media.

Tunku Jalil, who spent a year volunteering at the Singapore Zoo, died last Saturday (Dec 5) at the age of 25 after a year-long battle with liver cancer.

Known for his love for animals and interest in wildlife conservation, he studied zoology at a British university and also worked at the London Zoo for two years.

Tweets with a picture showing a hand holding up Tunku Jalil's tag bearing the name "Jalil Ibrahim" surfaced following the news of his death.

When Tunku Jalil was working at Zoo Singapore, nobody knows that he was Tunku Jalil. I mean he act like a normal people. Allahu ❤

A tweet by user Ayen (@MS_Azril) on Sunday night, which also contained a photo of the Prince at a coffee shop, has been retweeted over 3,000 times.

The name tag photo had been first tweeted by user @syffl on April 1. 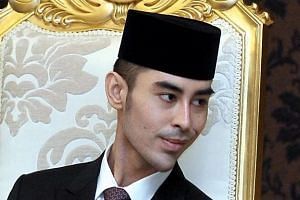 On Facebook, a former Singapore Zoo colleague recalled her first meeting with Tunku Jalil in 2009.

"It was his first day as a volunteer with Education, and he was assigned to my booth. He introduced himself as 'Jalil'. I saw his shoes, frowned, and asked him why he was wearing such nice shoes for volunteering at the zoo!" wrote Ms Fiza Aznor.

Ms Fiza revealed that she only found out much later that he was a prince, and remembered how he was "fun to talk to, funny, and down-to-earth".

Prime Minister Lee Hsien Loong also paid tribute to the well-loved prince in his condolence letter, and mentioned how Tunku Jalil had spoken to him about his work with the Singapore Zoo.

"He will always be remembered fondly as a young, humble prince who so readily loved and served his people," Mr Lee wrote.