BANGKOK (THE NATION/ASIA NEWS NETWORK) - People in Thailand will no longer be allowed to smoke at home if their habit has a negative effect on other family members due to exposure to second-hand smoke, once a new law comes into effect from Aug 20.

The law, known as the Act on Promotion of the Family Institute Development and Protection, was announced in the Royal Gazette on Friday.

The Act, which is aimed at addressing domestic violence in all forms, states that smoking at home can be harmful to health and thus is a form of violence towards others living under the same roof, Department of Women's Affairs and Family Development chief Lertpanya Booranabundit said.

He was speaking at the 18th National Conference on Tobacco and Lung Health held in Bangkok last week.

"If it can be proved that the health problems of family members stems from second- or third-hand smoke at home, it can lead to two court trials: one in Criminal Court for 'domestic assault' via smoke and the other at the Central Juvenile and Family Court. This could lead to a court injunction to protect the health of family members, with the smoker being sent to a rehabilitation centre to kick the habit," Mr Lertpanya said.

Dr Ronnachai Kongsakon, director of the Tobacco Control Research and Knowledge Management Centre under Mahidol University's Faculty of Medicine at Ramathibodi Hospital, said his agency had found that nearly five million households have smokers, hence more than 10 million people are exposed to second-hand smoke at home.

He said second-hand smoke doubled the risk of sudden infant death syndrome and increased children's chances of developing bronchitis or pneumonia by 47 per cent and asthma by 39 per cent.

The chance of women developing lung cancer after breathing in second-hand smoke at home is increased by 24 per cent. The risk is 19 per cent for those working in offices where smoking is allowed. 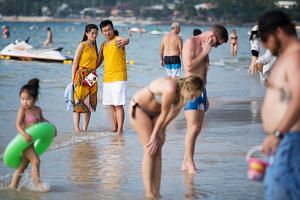 Associate Professor Adisak Plitapolkarnpim, who heads Mahidol University's National Institute for Child and Family Development, said clinics found to have ignored a young patient's exposure to second-hand smoke, with the smoker not being sent for rehabilitation, will be charged with violating Article 29 of the Child Protection Act.

He said this law also allowed people to report to the authorities if they find a child being exposed to second-hand smoke, while the Act on Promotion of the Family Institute Development and Protection will regard smoking at home as domestic violence creating a health hazard.

Thailand aims to cut down on national tobacco consumption by at least 30 per cent by 2025, as some 400,000 Thai people die from non-communicable diseases caused by smoking every year.