BANGKOK (THE NATION/ASIA NEWS NETWORK) - Winter in Thailand will be over next week, the Meteorological Department announced on Monday (Feb 11). Even though the smog problem is expected to improve nationwide once winter ends, the arrival of summer brings along a new problem - water shortage.

Meteorological Department director-general Phuwieng Prakhammintara told a press conference on Monday that with the final cold front of the season approaching Thailand, people in the upper part of the country will have one last chance to enjoy the cool weather before summer arrives in the third week of February. Summer will begin with bright prospects, Mr Phuwieng said, adding that the smog problem in the north and north-east will ease with the hot and windy summer weather, bringing an end to Bangkok's PM2.5 crisis.

"The cold front will bring about windy and wetter weather in the north, north-east and central regions, which will consequently improve the smog situation in these areas, because stronger winds and more rainfall will help eliminate the PM2.5 dust particles from the air and improve the air quality," he said.

The Meteorological Department has forecast that up until Wednesday, the upper region of the country will have more rain and stronger winds, and then experience a temporary 1 to 3 deg C drop in temperature as a result of the approaching high-pressure area from China.

Despite a recent improvement in the dangerous smog in Bangkok and nearby provinces, the Pollution Control Department's (PCD) real time air-quality monitoring network continues to show the north and north-east being badly affected by a dense haze. According to the PCD, Monday's daily mean of very fine dust particles - PM2.5 - in the northern provinces of Lampang and Phrae had soared to hazardous levels of 110 and 120 micrograms per cubic metre of air, respectively. Meanwhile, despite Khon Kaen's PM2.5 daily average yesterday being at 71 micrograms, it remained far above the safe standard set by both Thailand and the World Health Organization. That measurement was the first sign of improvement in air quality in the north-eastern province's safe standard, but Monday's PM2.5 level was the first sign of an air-quality improvement, after PM2.5 exceeded 90 micrograms for four consecutive days.

Mr Phuwieng said the current smog season in Bangkok would also end with the upcoming change of season. "As the strong southerly winds and hotter weather of summer have already arrived in this region, the people in the Bangkok metropolitan area can now breathe the fresh air that is blowing northwards to Bangkok directly from the Gulf of Thailand," he said.

"Meanwhile, the summer heat is also preventing the accumulation of PM2.5 dust particles and other pollutants in the air and ensuring that the PM2.5 smog will not return to Bangkok, at least until the next winter." 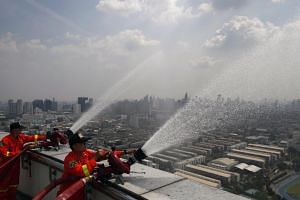 However, the problems of drought and saltwater intrusion are also looming. Water in many reservoirs in the northern, north-eastern and central regions has already nearly dried up, and the upper part of the country is expected to face a hotter and more arid summer. The Meteorological Department's Climatological Centre has pointed to the development of El Nino conditions in the Pacific Ocean as the primary factor for the diminishing rainfall throughout the Asia Pacific region. The centre expected that upper Thailand could also see a 30 per cent drop in the usual dry season precipitation, which would greatly aggravate the risk of water shortages and drought.

Meanwhile, the daily report on water by the Royal Irrigation Department's (RID) Smart Water Operation Centre noted yesterday that three major dams in the north-eastern and central regions - Ubonrat, Thap Salao and Krasiew - were at a critical risk of water shortage, with the remaining stored water in them already below 20 per cent. A total of 60 medium-sized reservoirs across the country are at under 30 per cent water storage.

RID deputy director-general Taweesak Thanadechophol, however, insisted that there was sufficient water for domestic consumption and businesses throughout this dry season. "Today, the four major dams in the Chao Phraya River basin still retain over 15 billion cubic metres of water, or 62 per cent of overall storage capacity, so we are confident that there will be no water shortage in the Chao Phraya River Basin," Mr Taweesak said.