PONTIAN (THE STAR/ASIA NEWS NETWORK) - A Singaporean single mother and her two teenage children pleaded not guilty to obstructing the duty of an Immigration Department officer in a special court at the Pekan Nenas Immigration Depot in Pontian, Johor, on Monday (Aug 22).

Freelance worker Quek Chin Fern, 42, her son Miguel Lim, 19 and daughter Cheryl Isabella Lim, 18, were alleged to have carried out the offence at a car exit lane in the Sultan Iskandar Customs, Immigration and Quarantine complex at about 3.30pm on Aug 12.

All three, who are Singaporeans, claimed trial to the charge that was read out to them before judge Salawati Djambari on Monday.

If found guilty each accused could be slapped with a fine of not more than RM10,000 (S$3,350) or a maximum five-year jail term.

Salawati allowed bail at RM10,000 with one Malaysian surety for each of the accused and set Sept 5 for the case next mention. 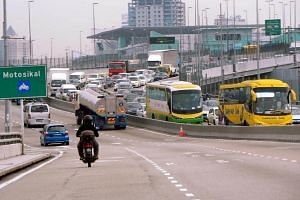 It was earlier reported that the trio were detained after they refused to lower the back window of their tinted car during inspection at the car zone heading towards the island republic.

They had also allegedly hurled abuse and accusations at the Immigration officer who wanted to inspect the vehicle.