A Singaporean man went on trial in Batam today (June 23) accused over using forged documents to obtain an Indonesian passport.

The Batam District Court heard that immigration officers had detained Teo Boon Tiak, 50, as he was boarding a ferry from the island's port of Sekupang bound for Singapore on Feb 18.

Prosecutor Arif Prasetyo told the court that Teo had used a fake Indonesian passport issued in Batam in 2012, bearing his photograph and stating his name as Tommy and his hometown as Medan city in Sumatra.

"The defendant had obtained the passport with the help of an Indonesian woman, who was his wife and who had since passed on," he said. 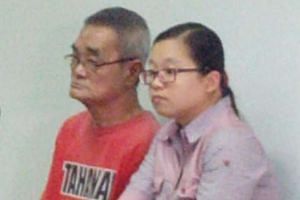 Immigration officers became suspicious after Teo excused himself to go to the toilet several times during questioning.

They then checked the toilet and found his Singapore identity card in the rubbish bin.

Under Indonesia's immigration laws, Teo could be jailed for up to five years and fined up to 500 million rupiah (S$50,500) if found guilty of using false documents to obtain an Indonesian passport.

The hearing will continue next Thursday.

The case is the second this year involving Singaporeans using forged passports.

Fifty-five-year-old Singaporean Damar Bahadur Chettri, alias Sam Chettri, escaped from a Batam detention centre in January after being arrested for using a false Indonesian passport to enter Singapore, according to local reports.

He had reportedly bribed immigration officials $40,000 to finance his escape illegally to Malaysia.