PETALING JAYA (THE STAR/ASIA NEWS NETWORK) - It was a terror ride for 12 Singaporean tourists when the double-decker bus they were travelling in crashed and overturned at the 31st-km mark of the Karak Highway.

They had been on the way back from Genting Highlands on Wednesday afternoon (Aug 31).

Gombak OCPD Asst Comm Ali Ahmad said the bus was believed to have rammed into the road divider before overturning near the Genting Sempah tunnel.

"Ten people were injured in the crash. We do not know the extent of their injuries. We are still waiting for the full report, including the identity of the victims," he said.

A spokesman for Grassland Express & Tours said nine of the 12 Singaporean passengers were hurt in the accident. None of them was critically injured, he added. 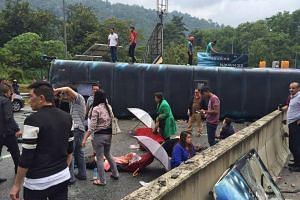 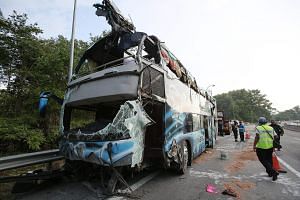 It is learnt that the impact of the crash caused the bus to skid for about 20m.

The victims have been sent to various hospitals in Bentong, Selayang and Kuala Lumpur.

The crash created a traffic jam stretching more than 9km.

ACP Ali said police were investigating whether the accident was due to reckless driving or mechanical problems.

An eyewitness who declined to be named said he saw the bus swerving to the right before hitting the divider and overtuning.

"It was very scary because we were just behind the bus.

"But I can tell that the driver wasn't speeding. He was driving within the speed limit, if I'm not mistaken.

"He could have faced a technical problem that caused him to lose control of the bus," said the witness.

At the Selayang Hospital, a victim's family member, who declined to be identified, said: "We don't know what exactly happened and how our relative is doing at the moment."