Singapore has reiterated that Malaysia's recent actions west of Tuas encroach into Singapore's territorial waters and violate the Republic's sovereignty.

"Accordingly, the purported extension of the Johor Bahru port limits encroaches into Singapore's territorial waters in the area and is a serious violation of Singapore's sovereignty and international law," the spokesman added.

On Tuesday, MOT had said the purported extension of port limits as well as repeated intrusions by Malaysian government vessels into Singapore territorial waters were a serious violation of Singapore's sovereignty and international law.

But in a statement on Wednesday, Malaysian Transport Minister Anthony Loke said that Singapore's claims were "inaccurate as the altered port limits for Johor Baru Port has not in any way encroached into any part of Singapore".

He suggested that the source of the dispute over the boundaries were a result of land reclamation. "Singapore has in recent years carried out extensive land reclamation in the area in question. It is trite law that land reclamation does not extend a state's basepoints and/or baselines," he said. 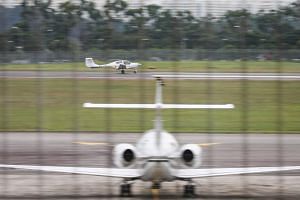 "Malaysia urges Singapore to immediately withdraw its Port Marine Circular issued on 30 November 2018 and prevent its enforcement agencies from further intruding into Malaysia's territorial sea and harassing vessels and persons lawfully permitted by Malaysian laws and authorities as well as international law to be present in Malaysia's territorial sea," Mr Loke said.

Singapore had said on Tuesday that it had lodged a strong protest against the Malaysian extension which began in late October. "Singapore has protested the unauthorised movements of, and purported assertions of sovereignty by these vessels, which are inconsistent with international law," it said.

Singapore's Transport Ministry has also requested that Malaysia amend its notices "to reflect the sovereignty of Singapore over the waters in question, and that Malaysia refrain from taking any further unilateral action".

Earlier on Wednesday, Tun Dr Mahathir had said that Singapore's claims of encroachment can be tested by measuring the new limits of Johor Baru's ports. "We can measure if it is true whether their border is correct and if we are still within our own waters," he said.

The two neighbours have been locked in a twin territorial dispute in recent weeks, with the disagreements becoming public on Tuesday morning when Mr Loke disclosed that Malaysia planned to reclaim airspace delegated to Singapore and that it was protesting against new flight paths from Seletar Airport as it would stunt development of the Pasir Gudang industrial district in Johor. Later that same day, Singapore's Transport Ministry revealed that it had protested against the new Johor Baru port limits.