KUALA LUMPUR (REUTERS) - Singapore could become the world's first country to only use sustainable palm oil as part of a green push to tackle forest fires and air pollution blighting South-east Asia.

Palm oil is the world's most widely used edible oil and found in everything from margarine to soap. Its production has led to deforestation, fires and worker exploitation, environmental groups say.

In a bid to stop the rot, a charity in Singapore - home to many of the world's biggest palm oil companies - will in January begin getting local businesses to commit to only using green and ethically-produced palm oil.

The goal is for the entire city-state of around six million people to switch by 2023, said Mr Benjamin Tay, executive director of The People's Movement to Stop Haze (PM Haze).

"It is a symbolic move for Singapore," he said by phone, adding that several restaurant brands had already committed to use only sustainable palm oil.

Slash-and-burn practices linked to palm oil production are often blamed for annual Indonesian forest fires that create thick haze in skies over large parts of the region - including Singapore.

Setting fires is the fastest and cheapest way for many farmers to clear land, and it can also leave peat soil in a better condition for planting, some forestry experts say.

The PM Haze initiative is receiving technical support from Singapore-listed commodity trader Wilmar International and will initially focus on restaurants and cooking oil before targeting other businesses.

"We will need to do a bit of hand-holding because the awareness and knowledge around sustainable palm oil is still fairly low, even in Singapore," said Mr Tay. 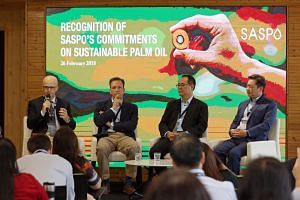 'You can feel the heat radiating', says Singaporean who helped battle forest fires in Indonesia

Indonesian fires that spread haze to the region burnt 1.6 million hectares of land this year: Researchers

The campaign was inspired by Britain's Chester, which this year became the world's first sustainable palm oil city.

A watchdog for the palm oil industry - worth tens of billions of dollars - last year adopted a stricter set of guidelines that included a ban on cutting down forests or using carbon-rich peatlands for plantations.

But growers and environmental campaigners warned the new rules would only succeed if brands and consumers got on board and bought larger amounts of oil certified as ethical.

"Singapore is at the epicentre of the global trade in palm oil and a hub for some of the biggest banks funding its expansion into tropical rainforests frontiers of Indonesia,"said Ms Gemma Tillack, forest policy director at US-based environmental group Rainforest Action Network.

"It is a country that has a huge role to play in tackling the haze crisis."

Malaysia and Indonesia - which together produce about 85 per cent of the world's palm oil - earlier this year attempted to apply pressure on local retailers to ban products with "palm oil-free" labels to protect their key export.