A beauty queen who was disqualified from the Miss Universe pageant in Thailand for arriving too late from her country was given a tour of the "Land of Smiles" by the locals who were sympathetic of her story.

The plight of Ms Marie Esther Bangura from Sierra Leone first came to light on social media when it was revealed she had taken two weeks to travel from her home country, via Ghana, to apply for a visa at the Thai embassy in Nigeria and then fly from Ethiopia to Bangkok where she arrived on Dec 8.

But it was six days after the Dec 2 deadline given by the event organiser, TPN 2018 Co, in order for her to make it for the promotional activities, Bangkok Post reported.

One Facebook user, Ms Phimnipha Dechkul, was one of the few Thais who showed Ms Bangura around Bangkok, including the Temple of the Emerald Buddha.

Posting photos of Miss Sierra Leone posing in Thai dresses she provided, Ms Phimnipha wrote: "As a homewner and as a Thai, I am happy to take care of you. And I'm glad to see Thai people like her and support her. She is a very beautiful and very bright woman. I love you."

Although Ms Bangura could not enjoy the limelight on the Miss Universe stage, she was no less getting attention from the media.

She said in a recent interview with Thai media: "I always wanted to represent my country and that's why I tried so hard to be here."

"Since I'm not competing, I still feel good because I got to meet people and learn new things," she was quoted as saying by Bangkok Post.

"I know everything you go through you learn a lesson, and I've learned a lesson. I've met different people. I feel so much loved and excited."

A post shared by Face Of Sierra Leone By IAMSL (@missuniversesierraleone) 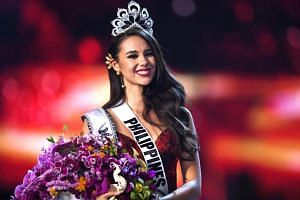 The Miss Universe 2018 contest that was held at the Impact Arena Muang Thong Thani convention centre in Bangkok on Monday (Dec 17) was won by Ms Catriona Gray from the Philippines.

One of the poorest countries in the world, Sierra Leone in West Africa saw some 50,000 lives lost during an 11-year civil war over blood diamonds that ended in 2002. The war inspired the award-winning 2006 Hollywood thriller Blood Diamond starring Leonardo DiCaprio.