In its editorial, the paper examines Indonesian Foreign Minister Retno Marsudi's remarks in the controversy over Canberra's bid to consider moving the Australian embassy from Tel Aviv to Jerusalem.

JAKARTA (THE JAKARTA POST/ASIA NEWS NETWORK) - It is difficult to dismiss the impression that Indonesia might have gone too far on Tuesday with its blunt attempt to interfere in the foreign policy of a sovereign state like Australia.

Australian Prime Minister Scott Morrison expressed his interest in the possibility of following United States President Donald Trump's decision to move the US Embassy from Tel Aviv to Jerusalem.

So far only Guatemala has followed in Trump's footsteps. It seems the motive is too simple. Some people may also question the timing, given that Australia will hold a crucial by-election on Saturday.

The Liberal-National Coalition government in Canberra may soon collapse if it loses the by-election for the House of Representatives seat of Wentworth in New South Wales.

Malcolm Turnbull vacated the seat after Morrison ousted him from the premiership in August. In revenge, Turnbull refused to help his party win the by-election. Desperately seeking support, Morrison appears to have tried to woo Jewish voters.

The foreign minister also summoned Australian Ambassador to Indonesia Gary Quinlan to her office on the same day.

The Seven Network quoted Retno as asking Payne, "Is this really necessary to do this on Tuesday? It will be a really big blow […]It will slap Indonesia's face on the Palestine issue," the message reportedly said.

"This will affect bilateral relations." 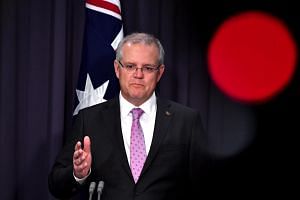 Retno was angry, apparently because Palestinian Foreign Minister Riyad al-Maliki was in Jakarta that day. She was naturally eager to demonstrate Indonesia's commitment to Palestine in front of her guest.

Canberra was clearly unprepared for Jakarta's outrage and could not hide its concern.

The President rarely displays impatience with a neighbouring country's policy. Morrison understandably was surprised by Jokowi's telephone diplomacy amid efforts to get closer to the Indonesian leader.

Hopefully both Morrison and Jokowi can reach a common understanding, because they both face much more serious domestic issues.

Worsening relations between the two nations will be counterproductive amid the uncertainties facing the global economy. Too often the two neighbors become trapped by unnecessary spats.

As a sovereign state Australia is entitled to move its embassy from Tel Aviv to Jerusalem, but it also should be ready to face the consequences of its decision.

Indonesia has every reason to raise its objections to Australia's policy but it would be too much to push its own will against its neighbour.