A commander tasked with preventing fires in Riau said he has issued a shoot-on-sight order across the Indonesian province against those found clearing land by burning, as growing forest and peatland fires shroud several areas in smog ahead of the Asian Games.

The order came as satellites detected 121 hot spots in Riau on Thursday morning (Aug 16) - a big jump from the 22 spots detected on Wednesday afternoon, according to the Meteorology, Climatology and Geophysics Agency (BMKG).

"Ninety-nine per cent of the land and forest fires in Riau Province are related to the intentional acts of irresponsible people," Brigadier-General Sonny Aprianto, Commander of the Riau Land and Forest Fire Task Force, was quoted by Antara news agency as saying on Thursday.

He said he had ordered army personnel to shoot "arsonists" across Riau. The Indonesian military has previously issued similar orders, as was the case in Jambi, central Sumatra, last year, to deter fire culprits.

Land-clearing fires have been seen as a serious threat to the 18th Asian Games, which will be held in Palembang, South Sumatra Province, from Aug 18 to Sept 2.

President Joko Widodo and other senior leaders have ordered efforts to combat land fires be stepped up to ensure that the quadrennial games would not be affected.

Brig-Gen Sonny said on Thursday that he had discussed the shoot-on-sight policy with Riau Police Chief Inspector General Nandang, and soldiers would be deployed to every military district compound in Riau to enforce the order.

The authorities had asked locals not to clear land by burning but without much success, the one-star general noted, according to Antara. Indeed, he said the slash-and-burn method for clearing the land has become more widespread.

Several arsonists have been nabbed, he added, with at least three cases in Dumai city now ready for trial.

Meanwhile, the fires have blanketed several areas in Riau, including the provincial capital of Pekanbaru, in smog.

"At first I thought it was morning dew, but apparently the environment was dimmed by the haze," Pekanbaru resident Musfarin told the Jakarta Post on Thursday.

Similar conditions were also reported in Dumai city, where visibility dropped to 4km on Thursday morning on the back of the thick haze, the newspaper said.

The haze in Dumai originated from local forest and land fires as well as hot spots from the neighbouring area of Rokan Hilir regency, where the worst fires in Riau were burning. 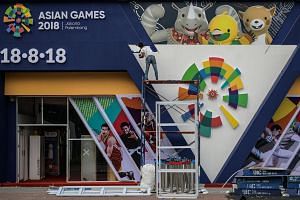 The fires in Rokan Hilir have burned down hundreds of hectares of oil palm plantation and peatland as well as 20 houses and several vehicles in Tanjung Leban village in Kubu district, reported Jakarta Post.

The fires have also forced residents to evacuate, the report said, without giving a number.

"We have informed land owners not to clear their land for plantation during the dry season, but apparently they ignored it. We did not have the proper equipment to put out the fires and it was hard to find a water source so the fire spread quickly," Tanjung Leban village secretary Wandri was quoted as saying. He said thousands of residents needed surgical masks.

"Four villages near us are covered with smog from the land fires. All the villagers now breathe in haze. The government must take action to help the people."

"But the dry season has helped the fires spread. Strong winds have also complicated wildfire suppression efforts," he said. Residents should "pray for rain", he added.