PUTRAJAYA - Prime Minister Mahathir Mohamad, who leads Malaysia's ruling Pakatan Harapan (PH) coalition, said on Sunday (March 3) that the PH coalition needs to look back and identify what caused the coalition's defeat in the Semenyih by-election.

This was even as he admitted that the pact between opposition parties Umno and Parti Islam SeMalaysia (PAS) was one of the possible reasons for the loss.

"We need to find out why we lost," Tun Mahathir told reporters, according to The Star, a day after a candidate from the Umno-led Barisan Nasional (BN) coalition defeated the PH candidate in the Semenyih state constituency in Selangor.

Umno's Zakaria Hanafi, 58, on Saturday polled 19,780 votes against the 17,866 garnered by Mr Muhammad Aiman Zainali, 30, from the Parti Pribumi Bersatu Malaysia, which is headed by Dr Mahathir and a member of the PH coalition.

Dr Mahathir, the Pakatan chairman, said the rivalry between the two opposition parties had previously helped the PH to wrest the seat away from Umno for the first time at the general election in May 2018, securing more than half the ballot with 23,428 votes. The win was one of many victories that allowed the party to oust the BN from government after over 60 years in power.

"Well, the last time we won (the state seat) in the 14th general election was because PAS and Umno were divided, and therefore, they couldn't achieve a good number," he was quoted saying by Malaysiakini.

But Dr Mahathir was sceptical that the Umno-PAS cooperation strategy would work in a general election.

"They can work together for by-elections, because a win or a loss is not important," he said. "But for the general election, they cannot work together. If they do, PAS will be left with nothing," he added, according to the website.

Dr Mahathir said that the PH's loss was also due to certain quarters playing religious sensitivities during the campaign.

Asked whether the PH's failure to fulfil its campaign promises had also played a part in the Semenyih defeat, Dr Mahathir said his new government needed time to work on delivering its promises, given the country's RM1 trillion debt.

"We want to fulfil the promises, but it cannot be done overnight. It takes a long time," he said.

Datuk Seri Anwar, the president of the PH member Parti Keadilan Rakyat, said the PH coalition could not defend the seat as it had yet to execute some of the programmes it had pledged. 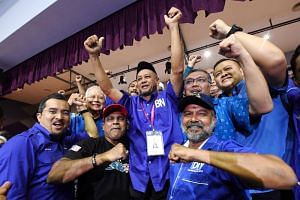 He said that given time, the people would understand why it is taking the Pakatan administration time to carry it out, The Star reported.

"The rakyat (people) will also understand why we had to undertake some other measures as well as our limitations in carrying out some programmes," Mr Anwar said.

He said that although PH lost Semenyih, both the Selangor and Federal governments were firmly in its control.

"The outcome surely gives us a message on the people's sentiments, especially the Malays," said Mr Anwar.

"We must take these into consideration but while we must always uphold the spirit of the Federal Constitution on the rights of the Malays and Islam, we must also ensure the needs of other races and racial unity is always preserved."

Mr Anwar also said the Semenyih result showed that the PH has to quickly look into the problems faced by the people.