Azmin had called the meeting in the wake of the PAS syura (consultative) council's decision on Thursday to end the Islamist party's political cooperation, or tahaluf siyasi, with his Parti Keadilan Rakyat (PKR) party.

However, Azmin assured them that PAS could still remain as part of the Selangor state government as it was formed in line with the people's mandate in the last general election.

PAS has severed ties with Malaysia's other main opposition parties and with the PKR at the national level, but still works with the PKR in Selangor, Malaysia's richest state. PAS holds three state Cabinet posts in Selangor, helps to run its town councils and controls its mosques. 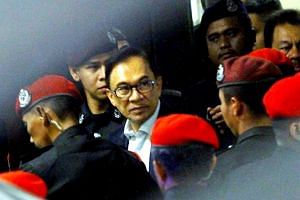 It is understood that the PAS assemblymen would continue to enjoy state development allocations, remain as municipal councillors and sit on village committees.

Azmin has been under pressure from his partners in the Pakatan Harapan opposition alliance to make a clean break with PAS following the move by PAS to sever ties. His priority is also to avoid a snap state election.

The Star has also learnt that the PAS representatives were taken aback by the Mentri Besar's request and said they would have to go back to their party for a decision.

According to The Star, the PAS leaders have been informed and a top party leadership meeting will be called soon to discuss the matter.

Azmin's unexpected move has caught the PAS leadership by surprise because the party had no plans to quit any of the state government posts despite the syura council ruling.

During the meeting, Sallehen, who recently took over from Iskandar as state PAS chief, explained that the tahaluf siyasi policy would be replaced by the taawun concept of cooperation for the benefit of the people and nation. Sallehen said the taawun concept would enable PAS to carry on in the state government.

However, it is learnt that Azmin was not impressed with the explanation which he thought would not go down well with the Selangor public.

PAS sources said the meeting between Azmin and the PAS representatives was civil although the Mentri Besar expressed dismay over the syura council's basis for ending ties.

The reasons cited by the council included PKR's failure to support PAS' Islamic agenda, including the party's drive to amend Malaysia's Syariah law, and attacks by PKR leaders on the PAS leadership. Other reasons included PKR's plans to work with parties which PAS believes are out to topple the PAS-led Kelantan government and for going against PAS in the recent Sungai Besar and Kuala Kangsar by-elections.

Azmin, who met the media after the meeting, was tight-lipped on details of the discussion but expressed disappointment with the syura council decision. He said he would brief his party president Wan Azizah Wan Ismail, who is on her way back from New York, on the matter.

Azmin later told The Star that the stability of his state government is paramount, and he had to study the situation before coming to a final decision.

"I have done all that is humanly possible through discussions and consultations but they have closed the door. Patience has its limits," he said.

Despite the looming crisis, Azmin and the PAS state exco members could be seen chatting amicably at a mosque function in Rawang later Friday, where the Sultan of Selangor officiated.

Azmin told reporters after the mosque function that PKR was prepared to contest against PAS in the general election.