KUALA LUMPUR (THE STAR/ASIA NEWS NETWORK) -The late King Abdullah Abdulaziz Al Saud of Saudi Arabia decided to directly transfer monetary aid to former prime minister Najib Razak's personal bank account instead of a political organisation to avoid complications on how it should be spent, the High Court heard.

Former minister in the prime minister's department Datuk Seri Jamil Khir Baharom, 59, said King Abdullah made the decision during a private chat after an informal meeting with the Malaysian delegates to Riyadh on Jan 11,2010.

The informal meeting was held before Najib's official visit between Jan 13 and Jan 16, 2010.

After the informal meeting came to an end, Mr Khir said he was signalled by Najib to follow him, King Abdullah and the King's translator away from the group for a confidential chat between the two country's leaders.

"The chat was about the King's pledge to make a contribution to Najib," said Mr Khir, who was reading his witness statement here on Tuesday (Feb 11).

The witness said, to his knowledge, there were several reasons why the King wanted to help Najib.

"King Abdullah wanted Najib to maintain Malaysia's stability as a moderate Muslim country and with this, Najib must strengthen his position and power as the prime minister during the 2013 general election.

"Secondly, it was to curb the influence of Syiah and eradicate religious extremism that was becoming commonplace in Malaysia," he added. 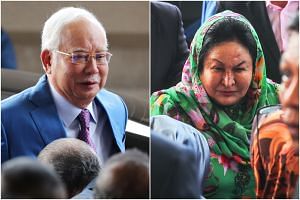 1MDB scandal: Najib Razak says he did not check if millions in his accounts were from Saudis

Mr Khir said King Abdullah mentioned that he would send his contribution and that it would be channelled to Mr Najib's private account.

"I understood that it needed to be channelled to Najib's private account to smoothen Najib's political journey.

"The King was also concerned that if the funds were channelled into any political organisation, it would complicate the way the funds were spent," he said, adding that Najib later spoke about the funds to Mr Anifah and Mr Omar.

On Monday (Feb 10), Mr Omar testified that Najib told him the funds would be used for election purposes.

Mr Anifah is expected to take the stand before Justice Mohd Nazlan Mohd Ghazali when the hearing resumes on Thursday (Feb 13).