KUCHING - Four Sarawak parties have left Malaysia's Barisan Nasional, leaving the former ruling coalition in tatters after it suffered a shock election defeat in May.

"The decision was made after much deliberation, reflection and due consideration, taking into account the country's current political developments post-GE14," said Sarawak Chief Minister and PBB president Abang Johari Tun Openg in a statement issued on Tuesday, using the acronym for the country's recent 14th general election.

GPS will have 19 MPs in federal Parliament and control of the Sarawak state assembly with 67 of its 82 seats.

The departure of these politicians whittles down BN's lawmakers in Parliament to just 59, compared to the 133 seats it won in the 2013 election.

It also means BN has lost both its former "fixed deposit" vote banks of Sabah and Sarawak, leaving it to govern only two of Malaysia's 13 states - Perlis and Pahang.

The new Sarawak coalition, however, will not be joining the ruling Pakatan Harapan coalition, which ended BN's six decades in power at the May polls, reported The Star. 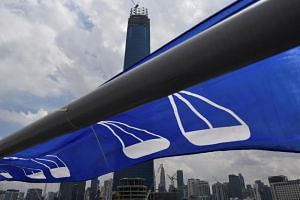 Four Sarawak parties to decide next week whether to abandon BN

Why villagers in Sarawak are faithful to Barisan

Datuk Patinggi Abang Johari said GPS would instead "cooperate and collaborate" with the federal government for the national interest and state rights and interests based on the Federal Constitution and the Federation of Malaysia.

In the run-up to the election, Pakatan Harapan had pledged to give 50 per cent of all taxes collected in Sarawak and 20 per cent of oil royalties to the state government if it captured Putrajaya.

It had also promised Sarawak, one of the country's least developed states, full autonomy in education, healthcare and fiscal matters, amid growing calls in the state for more autonomy from the federal government in accordance with the provisions of the 1963 Malaysia Agreement (MA63).

"We will protect the interests of all Sarawakians, regardless of the size of the community in an inclusive manner. Hence, the decision (to leave) was made in the interest of the people and the state above all else," said Mr Abang Johari.

"Our new coalition will enable us to focus on Sarawak interests and rights based on MA63," he said.

Mr Abang Johari added that the formation of GPS would enable the parties to serve the people better. "We are confident that this is the most pragmatic and appropriate decision to bring Sarawak into the new era desired by the people of Sarawak," he said.