KUALA LUMPUR - Business owner Ravi Rajamoney's clothing shop was on the brink of permanent closure, but that changed after Malaysia announced the reopening of more economic sectors in states with high rates of vaccination against Covid-19.

"I was ready to give up but the announcement really turned things around for me and my business. I finally feel like there's a light at the end of the tunnel," the 58-year-old told The Straits Times.

Since the reopening of his shop in Selangor in early September, business has picked up.

"We managed to generate 65 per cent more last month from our offline sales - this means we are finally making some money even after deducting our operations cost like rent. It was a different story when we weren't allowed to operate," he said.

Mr Rajamoney is among a group of business owners who claimed that their sales have increased since being allowed to operate, as Malaysia slowly returns to normalcy.

On Sept 14, the government said the reopening of more economic sectors was appropriate due to sustainability and the high vaccination rates. But businesses must have strict compliance to health protocols, including having only fully vaccinated customers and workers.

Malaysia has been seeing a downward trend of daily Covid-19 cases as more people are inoculated.

On Wednesday (Oct 20), it reported 5,516 new cases, compared with the daily infections of above 10,000 between July 13 and Oct 2. As at Wednesday, 70.6 per cent of the population have been fully inoculated, while 77.3 per cent have received at least one dose of the Covid-19 vaccine.

In a Malaysia Retail Industry Report released on Oct 7, Retail Group Malaysia (RGM) said the industry recorded a growth rate of 3.4 per cent in retail sales for the second quarter of 2021, from a 30.9 per cent contraction a year earlier. According to the report, the growth rate was due solely to the low-base effect a year ago.

"We are seeing a 70 per cent capacity at malls now, it's definitely an improvement and this could be due to the public having a pent-up desire in going out and about. But to say that things are really looking up, it's too soon, as what you're seeing now is people trying to recover," MRA vice-president Ameer Ali Mydin told ST.

"We are happy with the relaxation but to put it into perspective, we've been in 'prison' for a long time, which is why we're content with anything that we can get. But as long as there's a restriction, it would be impossible to bounce back 100 per cent and we don't know what will happen in the future, only time will tell," he added.

As Mr Rajamoney's earnings slowly grow, he would be working to improve his business' cash flow.

"We almost went bankrupt so I'm very careful with our money. I'm looking to recover the sum we bled during the times when we weren't allowed to operate," he said. 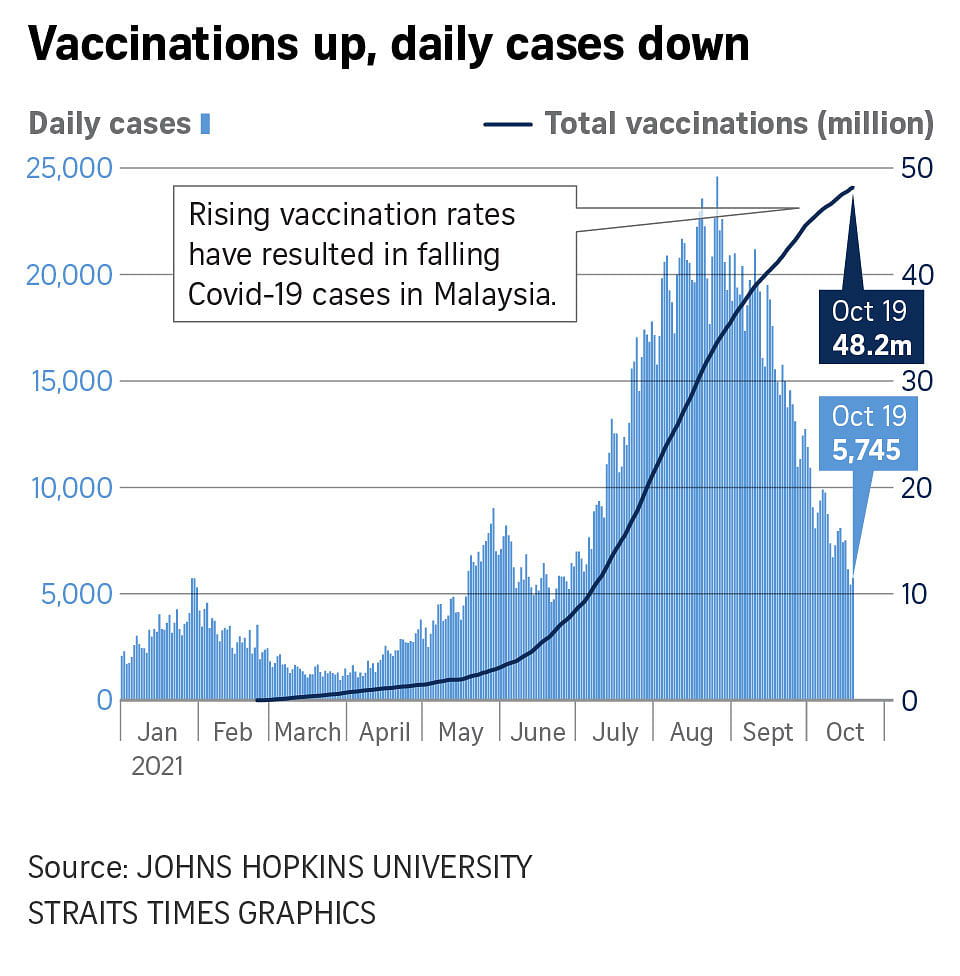 Workers, businesses in Johor hit by loss of Singapore dollars