TEKNAF (AFP) – A fresh push to repatriate Rohingya refugees to Myanmar appeared on Thursday (Aug 22) to fall flat, with no one turning up to hop on five buses and 10 trucks laid on by Bangladesh.

Members of the Muslim minority, 740,000 of whom fled a military offensive in 2017 that the United Nations likened to ethnic cleansing, are refusing to return without guarantees for their safety and a promise that they will at last be given citizenship by Myanmar.

“The Myanmar government raped us, and killed us. So we need security. Without security we will never go back,” Rohingya leader Nosima said, according to a statement released by the refugees.

“We need a real guarantee of citizenship, security and promise of original homelands,” said Mr Mohammad Islam, a Rohingya from Camp 26, one of a string of sites in south-east Bangladesh that are home to around a million people.

“So we must talk with the Myanmar government about this before repatriation.”

The vehicles provided to transport a first batch out of 3,450 earmarked for return turned up at 9am (0300 GMT) at a camp in Teknaf.

But four hours later none had showed up.

“We’ve interviewed 295 families. But nobody has yet shown any interest to repatriate,” Bangladesh Refugee Commissioner Mohammad Abul Kalam told reporters.

He said the buses and trucks would wait at the camp until 4pm and that they would continue to interview families. 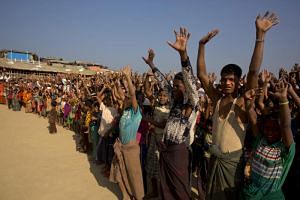 UN investigators say the 2017 violence warrants the prosecution of top generals for “genocide” and the International Criminal Court has started a preliminary probe.

It has sullied the international standing of Ms Aung San Suu Kyi, the Nobel laureate and former political prisoner who has risen to be the top civilian official in Myanmar but who has not spoken out about the alleged abuses.

The latest repatriation attempt – a previous push failed in November with many of those on a returnees list going into hiding – follows a visit last month to the camps by high-ranking officials from Myanmar led by Permanent Foreign Secretary Myint Thu.

Bangladesh’s foreign ministry forwarded a list of more than 22,000 refugees to Myanmar for verification and Naypyidaw cleared 3,450 individuals for “return”.

They also feared being sent to camps for internally displaced people (IDP) if they went back to Myanmar.

In New York, UN spokesman Stephane Dujarric said on Wednesday (Aug 21) that repatriations had to be “voluntary”.

“Any return should be voluntary and sustainable and in safety and in dignity to their place of origin and choice,” Mr Dujarric told reporters.

The UN Security Council met behind closed doors on the issue on Wednesday.

“Myanmar has yet to address the systematic persecution and violence against the Rohingya, so refugees have every reason to fear for their safety if they return,” Human Rights Watch said on Thursday.