PHUKET - A crocodile which was sighted at several beaches on the resort island of Phuket has been caught, reported local media.

The crocodile, which was named "Yanui" by local Phuket reporters after it was first sighted on July 18 at the Yanui Beach, was caught at around 4.30 am local time on Sunday (July 29) in waters off Layan Beach.

The crocodile is now being taken to the Phuket Coastal Fisheries Research and Development Centre in Pa Khlok, reported The Nation newspaper.

Locals and tourists were warned to stay away from the beaches until the reptile was found.

The team of hunters had to battle strong monsoon winds and high waves to catch the reptile which had evaded capture for days.

The crocodile left footprints in the sand on Bang Tao beach and was spotted on Thursday (July 26) by a drone near Laypang beach.

Eight cages containing chicken meat as bait were set up along the beach and around rocks to tempt the hungry crocodile. 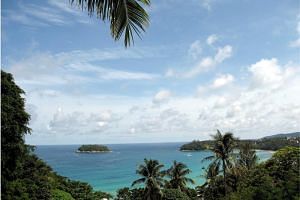 Thailand on the hunt for crocodile in resort town of Phuket

The female reptile is about 2.5 metres in length. It is still not known whether it is a saltwater crocodile or of mixed species.

"Normally the open sea is not a place where a crocodile would live," said Thon Thamrongnawasawat, a marine biologist and lecturer at Kasetsart University.

He said the presence of a crocodile in Phuket meant it was likely a hybrid saltwater version of the species bred on a farm, reported Agence France-Presse.

Phuket Governor Norraphat Plodthong said the authorities have checked all five crocodile farms in Phuket and no reptile has been lost in any of them.

"As this crocodile is not from a crocodile farm, it might be from unregistered sources, from an area around Phang Nga Bay, or someone might have released it," he was quoted as saying by The Nation newspaper.

In August last year, a much bigger crocodile was caught at a lake in the same area after it was sighted swimming offshore.