DAVAO (Philippines Daily Inquirer/Asia News Network) - Davao City Mayor Rodrigo Duterte on Tuesday (May 10) vowed to be “prim and proper” once he becomes president of the Philippines, despite his reputation for crude jokes and threats of extra-judicial violence against criminals.

“I need to control my mouth. I cannot be bastos (rude) because I am representing our country," Mr Duterte said in an interview with a pastor for the latter's late-night television programme.

“If you are the president of the country, you need to be prim and proper, almost, maging holy na ako (I would become holy).”

Mr Duterte is been known for his iron-fisted rule of Davao and his profanity-laced speeches. 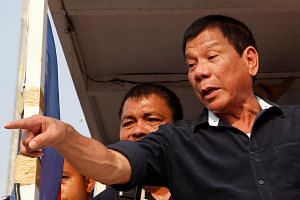 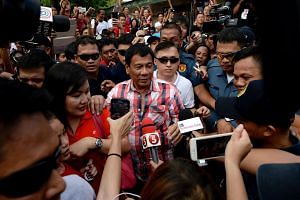 His common-law wife Cielito “Honeylet” Avanceña, with whom he has an 11-year-old daughter, insisted that Mr Duterte is ready to be a statesman.

“The character that he projected during the campaign was the character that is very appropriate for the campaign period kasi awayan ‘yan eh (because it’s full of arguments). Are you still going to don such character when you should act like a statesman?” Ms Avanceña told reporters on the sidelines of Mr Duterte’s interview.

She said the 90-day official campaign period was a battle between lions and tigers.

“But he respects the position. He would become the president of the Republic of the Philippines. He’s a lawyer. He know what he’s getting into. He knows the position he would be holding."

She said the real work was not during the campaign period but once Mr Duterte takes office as the country’s president.

“Weeks before he filed (his candidacy), we were fighting because I always reminded him about the negative side. ‘You know what, if you run for president, people will criticise you. You cannot sleep in your house, in your bed. Then they have to wake you up early,'” she said of her husband, who is known to be a late riser.