BANGKOK (BLOOMBERG) - Rising tensions in the South China Sea and the fallout from US-China trade war are set to dominate talks this week as top diplomats converge in Bangkok for a key Southeast Asia summit.

US Secretary of State Michael Pompeo will be joined at the Asean Foreign Ministers' Meeting by his Chinese counterpart, Foreign Minister Wang Yi, on the heels of trade negotiations between the two countries in Shanghai on Tuesday (July 30).

The meetings come amid accusations from Vietnam and the Philippines that China has become more aggressive in asserting its claim to vast swathes of the South China Sea - a move the US last week termed "bullying behaviour".

Still, China will be looking to further advance a long-anticipated maritime code of conduct with Asean - Southeast Asia's 10-nation bloc - after the two sides agreed to a preliminary draft, an Indonesian official said on Monday.

"The South China Sea will be an important agenda item - they will be seeking to curb any further hardening of stance by the Philippines," said Alexander Neill, an expert on Chinese military affairs at the International Institute for Strategic Studies.

"They will likely reiterate their sovereignty over the island and reefs and criticise external interference."

North Korean Foreign Minister Ri Yong Ho will not be attending, Yonhap News reported last week, dashing any chance of a meeting with US officials. It would have been the first encounter between the two sides since US President Donald Trump and North Korean leader Kim Jong-Un shook hands in the Demilitarised Zone last month.

While North Korea may not be in the cards, Mr Pompeo will seek to soothe trade tensions between two American allies - South Korea and Japan - according to a US official discussing Pompeo's trip who asked not to be identified. A dispute between the two escalated this month when Japan slapped curbs on the export to South Korea of three materials vital to semiconductor and display manufacturing.

Mr Pompeo, who is on a six-day trip through Thailand, Micronesia and Australia, will also give speech on US economic engagement in the region as part of the Trump administration's vision of a "free and open" Indo-Pacific.

For China, the meetings will serve as an opportunity to curb growing anxieties from Southeast Asian countries like the Philippines, who accuse them of deploying their Coast Guard and maritime militias to assert control in the South China Sea. 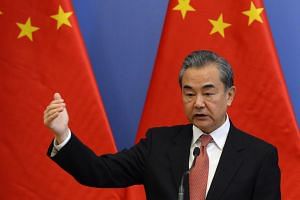 On Friday, China's Ministry of Foreign Affairs stressed the situation in the South China Sea "has been stabilised in general, with growing momentum for cooperation and increasing positive factors."

"We are envisaging the continuation of the negotiation between Asean and China on the single draft negotiating text of the code of conduct moving to the next stage," Mr Tavares said.

The negotiations follow the adoption of an Asean Indo-Pacific Concept last month that analysts say is a nod to the US's concerns. Still, the US State Department has argued that China is mounting pressure on Asean to adopt unfavorable terms in the code of conduct. The dispute underscores the region's difficulty in handling growing tensions between the world's two superpowers.

Trade will also feature heavily at the summit given the ongoing US-China trade conflict, said Harsh Pant, professor of international relations at King's College London, adding it will be tough for the bloc to maintain a balance between the two economic super-powers.

"Asean is under unusual stress as a result of growing contestation between the US and China," Mr Pant said.

"The traditional comfort of having China as an economic partner and the US as security partner is no longer very valid."